Can the second-generation Cee'd build on original’s success and take class honours? 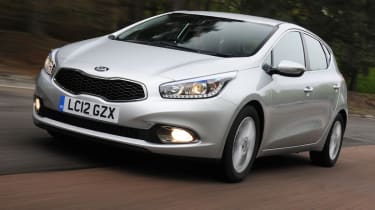 8
It’s been a long time since a new Kia entered an Auto Express road test as an underdog. The success of the excellent Rio supermini, stylish Sportage SUV and elegant Optima family saloon means that any model from the company is now expected to shine. And the MkII Cee’d is no exception.
Like its predecessor, the newcomer has been designed at Kia’s European headquarters in Frankfurt, Germany. Under the skin, it’s almost identical to its Hyundai i30 sister car, but the Kia has a sleeker, more sophisticated look due to its softer curves and flowing lines. The car in our pictures is a mid-range 2, yet it shares the 16-inch alloys and distinctive LED running lights of our range-topping 3 test car.
Advertisement - Article continues below
Climb aboard and you’ll find that Kia has worked equally hard on the cabin. The attractively styled and well laid-out wraparound dashboard takes its cues from the larger Optima, while most of the plastics and switchgear are top-quality. Only the cheap-looking digital clock mounted on top of the dash spoils the upmarket ambience.
A wide range of seat and wheel adjustment makes it easy to get comfortable, while 3 trim is loaded with the sort of kit that’s normally reserved for expensive executive cars, such as dual-zone climate control, a touchscreen sat-nav, Bluetooth and an iPod connection.
There’s also a decent amount of space on offer. Occupants in the back get nearly as much head and legroom as in the roomy Golf, plus the wide rear bench will easily accommodate three adults.
Advertisement
Advertisement - Article continues below
The Kia has clearly been designed with families in mind, as it’s full of useful storage space, including door bins front and rear, a large glovebox and two cup-holders hidden in the rear armrest. The well shaped 380-litre boot is the largest of our trio, while a low loading lip makes it easy to lift heavy objects in and out.
Advertisement - Article continues below
Fold the rear bench flat and the available capacity increases to 1,318 litres, which is 13 litres more than in the Golf. But what the Cee’d gains in space, it loses in pace. At the test track, it completed the 0-60mph sprint in 11 seconds, which was four-tenths slower than the identically engined Hyundai.
But it’s worth pointing out that our test car only had a handful of miles on the clock, so its performance should improve once the engine has been run in. On the road, the Cee’d feels every bit as eager as its rivals, while its 126bhp 1.6-litre diesel remains smooth and refined even at high revs. The six-speed manual gearbox has a clunky but precise shift action, plus the brakes are powerful and progressive.
Drive the Cee’d down a twisty back road and you’ll discover impressive composure and limpet-like grip. And while it’s not quite as engaging as the Golf, it’s a vast improvement over its somewhat leadfooted predecessor.
Only the Flex Steer system disappoints. It’s the same set-up as in the i30 and allows you to choose from three different modes that adjust the steering weight according to road conditions and driver preference. We found Comfort mode was too light and Sport offered too much artificial resistance to inputs. It’s best just to leave it in Normal mode.
Advertisement - Article continues below
Given that it’s mechanically identical to the Hyundai, we were surprised to find the Cee’d is more comfortable over bumpy surfaces – although it’s not as supple as the Volkswagen. There’s also very little wind and road noise, which helps make it almost as refined and relaxing over long distances as the extremely accomplished Golf.
But value is where the Cee’d really shines. At £20,095, it undercuts the Golf by £350, plus it’s backed by a seven-year warranty. The addition of EcoDynamics kit, which includes stop-start and low rolling resistance tyres, results in CO2 emissions of 100g/km, meaning it will cost less to tax.
Yet it’s unlikely to hold its value as well as the Golf, and we found it was less economical. Will these issues cost it a debut road-test win?