Is there a production future for Shell’s reengineered version of Gordon Murray’s T25 city car? We take a drive to find out… 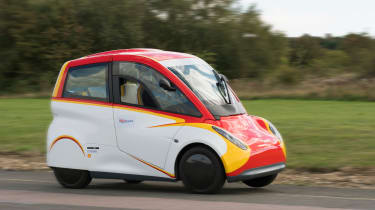 Remember the Murray T25? The radical, eco-friendly little city car concept penned by ex-McLaren designer Gordon Murray that debuted in 2010 to much fanfare.  It weighed around 630kg, had a six-metre turning circle and could seat three but despite confident talk of an eventual production car, it never went on sale.

However, back in April 2015 it was announced that Shell Lubricants had partnered with Gordan Murray Design for ‘Project M’, aiming to completely redevelop the T25 concept. In conjunction with an engineering consultancy called Geo Technology, a prototype was designed, built and revealed a year later. Six months on, and we’re among the very first people to drive it.

This time around, Shell and GMD are in serious discussions with several mainstream manufacturers. The aim is to produce a car that’s not just efficient on the road, but environmentally friendly across its whole life cycle – from manufacture, through ownership to disposal. Shell boasts that you could buy this concept car, drive it for more than 60,000 miles, and it would use less energy than it takes to build and ship a ‘typical’ SUV to a showroom. That’s a pretty bold claim. 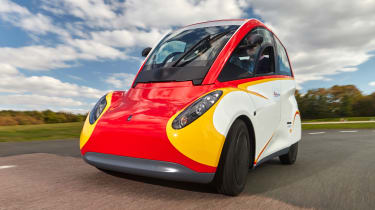 By not relying on batteries or hybrid systems, the Project M car is not only very light but could be produced cheaply. Bosses estimate it could be sold as a production car for less than $10,000 (around £7,800).

The original T25 was said to manage fuel economy of 74mpg combined, but that wasn’t deemed good enough by Shell. So as a starting point, the team ripped apart the 660cc three-cylinder petrol engine and set to work reducing friction. There are mechanical improvements, but the main reduction comes in the form of super-low viscosity Shell lubricant. As a result, total engine friction has been cut by more than 20 per cent.

The new, curvier bodywork is the result of extensive work to improve the drag coefficient of the concept, too. Gordon Murray said his team could do no better than 0.33cd with the T25, but the Shell team managed to improve than significantly to 0.29cd.

The resulting MPG figures are impressive, but need to be taken with a pinch of salt. A Millbrook Proving Ground powertrain engineer stated that the headline 107mpg figure was recorded at a ‘steady state’ of 45mph, rather than on a traditional combined cycle. However, the independent testers did carry out industry standard NEDC cycles, claiming a 32 per cent improvement in fuel economy over an unnamed sample city car (believed to be a Smart ForTwo).

Shell Project M concept car: How does it drive?

Our test drive was limited to two laps of Millbrook’s city driving course, but that gave us enough time to see that this is still quite a long way from a production ready car. Bosses were honest in saying it’s an early first prototype, but we were still surprised at how unfinished it felt, both inside and out.

Even so, there are plenty of ways that the Project M feels pretty revolutionary – not least in how you get into it. When you push a button on the dash, half the entire front of the passenger compartment moves up and forwards and you clamber in to a centrally-mounted driver’s seat flanked by two small passenger chairs.

You sit very high up, with your legs pointed straight downwards onto the pedals like you’re driving a van. It’s disconcerting at first, but the benefit is a great view out. The steering wheel looks aftermarket, although behind it is a modern digital display for the dials and screens for door mirror-mounted cameras. Exposed carbon around the lower parts of the interior emphasise just how light it is.

• The car of the future: the tech behind Project M

Getting moving in the Shell concept car is tricky – push the throttle too hard and it lurches forwards with little finesse. Be gentle, though, and it’ll pull away smoothly – that is, until the sequential automatic gearbox changes gear. Bosses claim there’s still plenty of fine-tuning to be done, so hopefully the painfully slow and jerky gear changes can be sorted out. 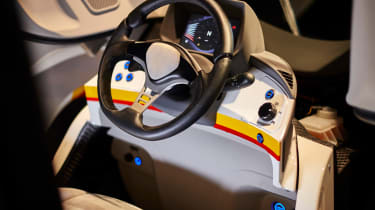 The tight turning circle remains, meaning the car feels very agile, but it’s not particularly comfortable with the bodyshell creaking over bumps as it hops and skips about. Still, there’s perky performance considering the fuel efficiency, even if it is quite loud in there when you get past 30mph.

If you judge the Shell concept car alongside any production city car it seems unrefined, unfinished and unsafe. But that would be missing the point; it’s not going into production any time soon, so it’s been built to showcase how future small cars could make the most of every last drop of fuel.  It’s impressively energy efficient personal transport, no doubt. We’ll reserve full judgement for when the concept has been developed a bit further.