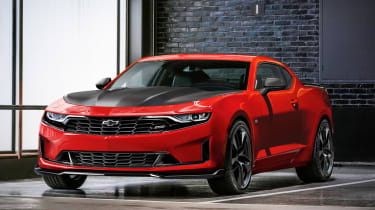 This is the new Chevrolet Camaro, an updated version of the American muscle car now in its sixth-generation. And for the first time Chevrolet has made the 1LE handling Pack available with a four-cylinder engine.

For a mid-life facelift the Camaro has undergone quite a transformation. A new headlight and grille arrangement has been introduced which, according to Chevrolet, also helps aid airflow and engine cooling. 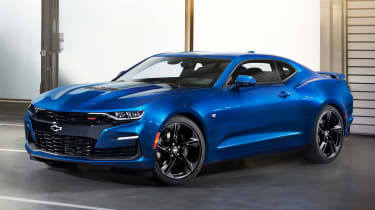 The flagship Camaro SS gets a slightly different front-end look with a larger air intake.

Inside the biggest change is the arrival of a new infotainment system; a seven-inch display is standard, while a larger eight-inch touchscreen can be added as an option. Elsewhere a reversing camera, forward collision warning and an uprated Performance Data recorder have been introduced.

For the first time buyers also have the option of the Camaro Turbo 1LE, it's powered by a 2.0-litre four-cylinder engine, which develops 272bhp and 400Nm of torque. The 1LE handling pack remains rear-wheel drive and can be paired only with a six-speed manual gearbox, while stiffer suspension and tuned dampers are also included.

Do you like the Chevrolet Camaro's new look? Let us know in the comments section below...