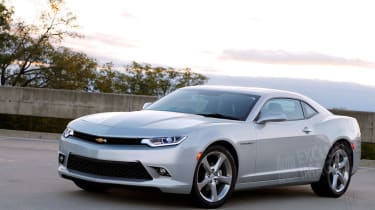 The first Ford Mustang to be sold officially in the UK in right-hand-drive form may have some serious competition if the latest spy shots are to be believed. Chevrolet is readying a new version of its own muscle car – the Camaro and our exclusive images reveal how the 2015 Chevrolet Camaro could look.

Our spies captured the camouflaged Camaro being tested at the Nurburgring and it’s clear to see that the American firm is sticking closely to the coke-bottling styling and retro looks of the current car. 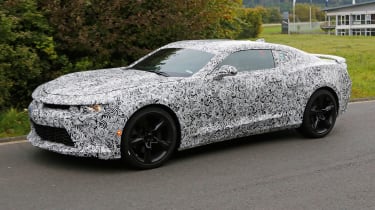 Our exclusive rendering of the new Camaro, meanwhile, shows how the finished car could look, demonstratoing that while some of the distinctive creases of the present model will be softened, the car’s traditional menacing look will be aided with new headlights and a slim grille, emphasising visual width and giving the new Camaro greater presence on the road.

The spy shots show a test mule with four tailpipes hinting at V8 power for the new version, but it’s also likely that Chevrolet will offer a more economical four-cylinder Camaro just like Ford is doing with the Mustang. It’s also expected that the new Camaro will be heading to the UK too. 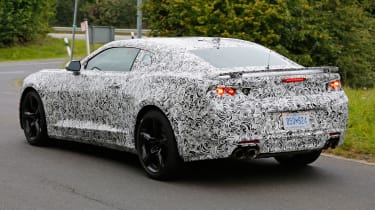 Despite General Motors axing the American brand in the UK late last year due to poor sales, Chevrolet has said that “halo” models will make their way to these shores – cars like the Corvette and Camaro. But don’t expect any right-hand drive variants – the new two-door coupe will be a left-hooker only.

Prices aren’t confirmed but expect only a small increase over the current Camaro, which is priced at £35,345 for the Coupe and £40,345 for the Convertible. By comparison, the new four-cylinder EcoBoost Mustang is expected to cost from around £30,000. It’s likely the new Camaro will gets its public debut at the Detroit Motor Show in January 2015 or the New York Show two months later.

Who will win this epic UK muscle car face-off? Let us know in the comments section below...