At the end of the Daewoo, it is time to get into a Chevrolet... and we were quick off the mark to drive the first all-new model to be launched under the American brand, which replaces GM Daewoo in the UK. 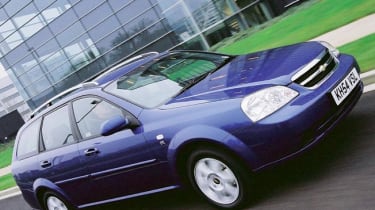 Chevrolet is hoping to attract new buyers to its showrooms, yet while the Lacetti Wagon is a competent and keenly priced load-lugger, it's unlikely to appeal to a different audience. But there are big things coming, with a sporty Lacetti, revised Matiz and new 4x4 set to bring fresh life to the brand.

At the end of the Daewoo, it is time to get into a Chevrolet... and we were quick off the mark to drive the first all-new model to be launched under the American brand, which replaces GM Daewoo in the UK.

Unlike other models in the Chevrolet line-up, which are rebadged versions of the Korean maker's past models, the Lacetti Station Wagon is completely fresh. It will come in one trim level only - SX - with a 1.6-litre 108bhp petrol engine and either a five-speed manual or four-speed auto transmission.

While the estate is not a car that's likely to excite, what it lacks in visual sparkle it makes up for in value, with an exceptional spec for its £10,995 asking price. Standard kit includes alloys, electric windows, air-con, a chilled glovebox and a CD player, while the load area is complemented by two cargo nets and a luggage cover. At 4,580mm, the Lacetti is 54mm longer than a Mercedes C-Class, and that makes it an enormous amount of car for the money.

The boot is roomy, with maximum space of 1,410 litres and a flat rear deck, while the rear seat can be split 60:40 to give further practicality. None of this is groundbreaking, but it does make the Lacetti Station Wagon a practical and well equipped package, especially as the price includes three years' free servicing and the top level of AA cover, on top of the standard three-year warranty.

However, it is not all perfect. While the Lacetti is a quantum leap over

the cars Daewoo was producing five years ago, it still seems underdeveloped in some areas - a fact that no amount of rebadging can hide. Some of the interior plastics feel cheap, while the cabin's shape - based on the MkIV Vauxhall Astra - means the front footwells are a bit cramped. The switchgear layout also seems dated.

On the road, the Chevy feels composed, with a decent ride and reasonable handling. It rolls a bit through corners, but grip levels are good, and it is never unpredictable. The steering lacks feedback, though, and while the brakes work well, there is little pedal feel.

The biggest criticism is with the engine, which while fairly refined, lacks top-end performance. It is happy cruising, but frequent downchanges are necessary to maintain momentum on the motorway, something that is more noticeable when carrying a large load.

So the Lacetti is by no means a class leader, but it does offer exceptional value.