With a new brand comes a new image. So says Chevrolet, which plans to lay the ghost of Daewoo to rest with a facelifted model range. 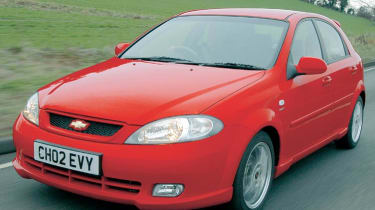 This car proves budget motoring needn't restrict you to a supermini or an entry-level family model; the Lacetti Sport bridges the gap between the two. Those requiring a better car for the money should search the used market, but if you want to buy new, the Chevy offers bigger car luxury and practicality for the price of a similarly specced Ford Fiesta or Vauxhall Corsa.

With a new brand comes a new image. So says Chevrolet, which plans to lay the ghost of Daewoo to rest with a facelifted model range.

Promising it will do much more than simply recycle favourites such as the Matiz and Kalos, the firm has already revealed plans for a bold new off-roader, which was seen at the Paris Motor Show last September.

In the meantime, however, the company has to make the best of existing Daewoo-designed products - and that is where the Lacetti Sport comes in.

Powered by a 120bhp 1.8-litre engine and equipped with a bodykit, 16-inch alloy wheels, front foglamps and a sports exhaust as standard, the Lacetti Sport is a much more daring proposition than the Daewoo-badged models of the past. With lowered suspension, the ground-hugging side skirts give the Lacetti a surprisingly dynamic appearance and make the most of the neat Giugiaro-styled lines.

The Sport is well equipped inside, too, with four airbags, a six-speaker Blaupunkt CD player, electric windows all-round, heated mirrors and leather trim on the seats, gearknob and steering wheel. For £11,995, it is an attractive package - on paper at least.

But if you are used to the soft-touch luxuries of most European-built offerings, some of the Chevrolet's finish still appears rather cheap. The steering wheel centre is trimmed in a gloomy black plastic, while the column stalks and window switches lack the precise feel of some rivals.

Nor does the Lacetti have the driver appeal to match its hot hatch looks. It is reasonably quick and the 1.8-litre powerplant is always responsive, but the engine note is coarse under hard acceleration and is not especially refined at cruising speeds. And while the stiffened, lowered suspension makes a notable difference compared to lesser Lacettis, the springy clutch and long-throw gearbox will put enthusiastic drivers off.

The standard-fit anti-lock brakes are effective, but the middle pedal lacks feedback and it is difficult to bring the Lacetti to a halt smoothly. However, the steering is much better than on other models in the range, providing a sharper feel through the wheel.

Despite its dynamic shortcomings, if viewed as a well equipped budget small family hatch, the Lacetti Sport makes a lot of sense - especially when you consider that Chevrolet has thrown in its 'Complete Care' package, which gives three years' free servicing and AA cover on top of the normal warranty.

Previously, Daewoo stood for no-nonsense, no-frills motoring. Now, under Chevrolet, the no-nonsense approach is still there, but there are frills if you want them - and few cars this size are as well equipped for the money. It might not be the performance model its name suggests, but on value alone the Lacetti Sport is the most convincing new Chevy yet.