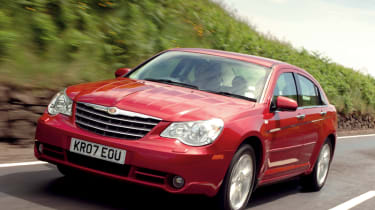 The Sebring is part of a massive product offensive by Chrysler over the next few years. Judging by the quality of its new family car, the manufacturer has a tough time ahead. Despite keen pricing and impressive levels of standard equipment, the distinctive styling could well be its Achilles' heel. And if that doesn't put people off, the poor build quality probably will. Its rivals have very little to fear.

Family cars are rarely chosen for their looks. While Ford's new Mondeo has a glitzy shape and Vauxhall's next-generation Vectra will get a sleek profile, dull and dutiful is the norm.

And that's where the new Chrysler Sebring is hoping to break the mould. Although demand for traditional family cars is on the decline, they are still the UK's third-biggest sellers. The US firm aims to grab a slice of the action with its new model's all-American styling.

Interestingly, Chrysler bosses know the Mondeo has raised the bar in terms of quality and practicality, and are keen to stress their saloon isn't a direct rival for the all-conquering Ford. Instead, the brand is pitching its new model as a more distinctive alternative to a Toyota Avensis or Honda Accord.

There is no denying the Sebring stands out. But, sadly, it's dramatic for all the wrong reasons. The creased bonnet and massive chrome grille, with its bulbous bumper, give the car a clumsy face. In profile it's slightly better, thanks to a bold waist line and standard-fit 18-inch alloys.

At least the Sebring's cabin is more adventurous than its rivals', and quite appealing - until you climb behind the wheel. Material quality and finish is way behind the rest of the class.

There are rough edges galore, while bits of trim feel as though they could come off in your hand. However, there's one saving grace. The leather-rimmed, electrically powered driver's seat is comfortable and this, plus the adjustable steering wheel, makes it easy to find a good driving position.

On the road, the Sebring performs adequately. There's minimal roll in corners, but while the suspension is firm, it feels under-damped, resulting in a jittery ride on rougher surfaces.

Chrysler has priced the Sebring just below its rivals, but as it only comes in top-spec Limited trim, it gets far more standard kit. Sadly, the saving isn't enough to hide the fact that the US model is at the bottom of its class. And it won't be helped by the imminent arrival of Dodge's cheaper and better-looking version, the Avenger.