The Chysler Ypsilon offers striking looks, efficient engines and an upmarket interior, but it comes at a price 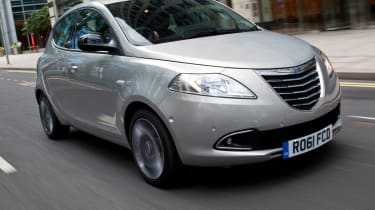 The tiny Chrysler Ypsilon is essentially a rebadged Lancia, and promises to provide unrivalled luxury, technology and refinement for a supermini. It's based on a stretched Fiat Panda platform and comes with five doors and a more upmarket interior. The Ypsilon is more expensive than its rivals, but it does come with the Fiat range of efficient and punchy engines and a decent amount of kit. There's not a lot of safety equipment, though.

The Ypsilon drives well around town, thanks to light controls and a high driving position. But it's not so good on the open road, where a lack of grip, poor refinement and body control means it trails well behind its rivals. The steering offers very little feedback and the soft suspension set-up means it wallows over big bumps and crashes noisily into potholes. Under the bonnet, there’s a familiar line-up of Fiat-sourced petrol and diesel engines. This includes a 1.2-litre petrol and an efficient 1.3-litre Multijet turbodiesel. But the eager, punchy 875cc TwinAir is the pick of the range, thanks to its healthy 145Nm torque output which helps provide strong mid-range pace.

The 1.3 Multijet offers the best fuel economy, with an official figure of 74.0mpg and 99g/km of CO2, which means its exempt from the London Congestion Charge and free to tax. The TwinAir is then said to manage 67.0mpg and 99g/km, but even the 1.2 petrol is said to return 58.0mpg and 115g/km. Every model comes with stop-start and a gearshift indicator, to help you get near those official figures. Servicing is needed every two years (or 18,000 miles for the petrol engines and 21,000 for the diesel). Unfortunately the Ypsilon is more expensive than its rivals to buy in the first place.

The most striking thing about the Chrysler Ypsilon is its looks. The styling is bold, with its mix of fussy curves, creases and straight lines. It's tall and narrow, the chrome grille is bold and the optional two-tone paint does nothing to improve the looks. On the inside, there's a high-set gearlever and a big central instrument pod which creates an equally daring interior, and one that's more eye-catching than sensibly styled supermini alternatives such as the VW Polo and Ford Fiesta. But it all feels a bit cheap compared to rivals, with lots of hard and shiny plastics. There is a decent amount of kit, though, with keyless entry, ambient lighting, electric front windows and stop-start. Chrysler says the Black&Red special edition is proving popular, and that comes with 16-inch alloys, front foglights and special trim. Big car options include xenon lights, an eight-speaker Bose stereo and a clever self-parking system.

The Ypsilon has a 245-litre boot, which is considerably more than the Fiat 500 but quite a bit less than the Fiesta and Polo. It's a shame the 60:40 split rear seats don't fold flat, which means there's a big step in the floor. There's not a lot of room for rear passengers, with knee and headroom both tight due to the coupe-like roofline. Entry-level S cars only get four seats - you'll have to opt for a higher-spec if you want five seats.

The Ypsilon hasn't yet been crash tested by Euro NCAP. Safety kit includes ABS plus driver, passenger and curtain airbags. Side airbags are standard on SE trim and above. Semi-automatic models gets stability control as standard, but this isn't even as an option on entry-level S models. The Ypsilon only went on sale in the UK earlier this year, so we don't yet have any reliability info. Fiat finished last in the 2012 Driver Power survey, which doesn't bode well for reliability. 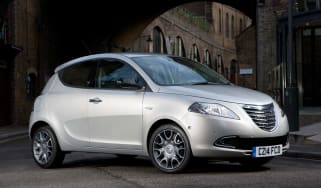 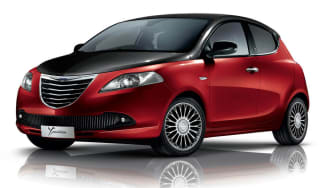 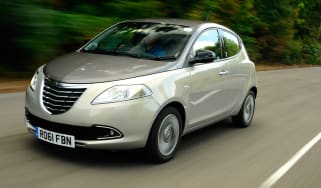 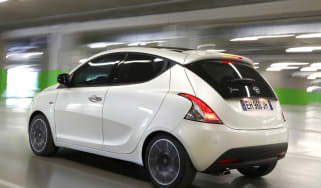 Re-badged Lancia will go on sale in the UK for the first time. We find out what we to expect from the Ypsilon.
Skip to HeaderSkip to Content