Re-badged Lancia will go on sale in the UK for the first time. We find out what we to expect from the Ypsilon. 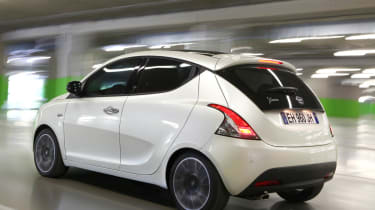 At its heart, the Chrysler Ypsilon is essentially a more practical and cheaper version of the Fiat 500 – and that’s no bad thing. The extra doors are hidden well, ensuring the Ypsilon loses none of its style and the small engines and light steering are perfect for nipping around town. The ride could do with being a little more comfortable and the interior doesn’t quite live up to the exterior but there’s still plenty to like about Chrysler’s smallest model.

Is this the most popular car you’ve never heard of? The Ypsilon has been on sale since 1996 throughout Europe under the Lancia brand, racking up as many as 85,000 sales a year. Now it’s coming to the UK wearing a Chrysler badge. So can it continue its success here? We took to the road in a Lancia-badged model to find out.
Both Chrysler and Lancia are under Fiat ownership and the Ypsilon rides on a slightly lengthened version of the 500’s platform. It may not have that car’s retro appeal, but the Chrysler looks like nothing else on the road and for some that’s a huge plus.

The extra length in the wheelbase – 300mm has been added – means there is space for four adults to sit comfortably and boot space is reasonable at 245 litres. For the first time on an Ypsilon, this car gets four doors too.
Inside, cabin quality is pretty good. No matter which model you go for you get a soft-touch dashboard trimmed in cloth for lower-spec models and a convincing man-made leather for more expensive variants. Elsewhere, the piano black centre console adds a touch of class. Our only criticism is that the design could be a bit more exciting.
Underneath the bonnet, the engine line-up will be familiar to Fiat 500 owners and includes the turbocharged two-cylinder TwinAir unit tested here, which claims CO2 emissions of 99g/km and an economy figure of 67.3mpg. There’s an entry level 1.2-litre petrol and a 1.3-litre diesel too, which also claims CO2 emissions under 100g/km.
Throughout our test route the TwinAir unit impressed with its playful engine note and 84bhp power figure which proved perfect for nipping around town. The disappointment comes when you fill-up. Our trip computer was showing we’d achieved just 35mpg over our mixed test route – almost half what the claimed figures suggest. In fact the 1.2-litre petrol unit actually performed better for fuel economy over the same route.
On rough roads and in the bends, the Ypsilon reveals its 500 underpinnings behaving almost exactly like its Fiat stablemate. The ride is mostly comfortable over everyday road surfaces but large potholes send a thud into the cabin. In corners, there’s plenty of roll and the steering tends to isolate the driver from the action somewhat.
Prices are expected to start from around £10,500 with top-spec models costing as much as £17,000.
Share this on TwitterShare this on FacebookEmail