Citroen's Cactus M beach buggy has made its debut in Frankfurt 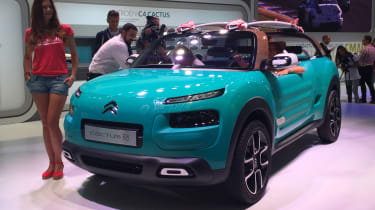 Citroen has revealed how a convertible version of its Cactus crossover could look.

Called the Cactus M, the drop-top crossover concept is Citroen’s star car on its stand at the Frankfurt Motor Show. We've already had an exclusive look at the quirky convertible, and now it's made its public debut in Germany, bringing a touch of sunshine and Gallic charm to the show.

Auto Express first brought you the news Citroen was building a wacky convertible version of its Cactus last month. But more importantly, we also revealed the French firm was delving into its heritage and how the concept would pinch key design themes from the classic Citroen Mehari. 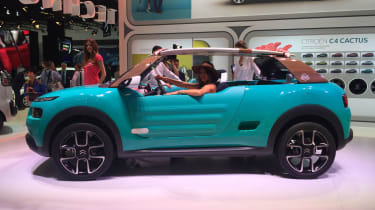 Built between 1968 and 1986, the Mehari was a utilitarian car based largely on the 2CV. With its narrow wheels, raised suspension and tough plastic bodywork, the Mehari became a staple of French rural and beach life. Now, 30 years on, Citroen is holding up the car as one of its icons – in the same vein as the 2CV and DS – and is trying to revive its ethos with the Cactus M.

It’s not just the M in the name that is a nod to the Mehari though, as the windscreen has a 60-degree rake and the unique alloys are shod in thin tyres just like the original. Moreover, there’s a single windscreen wiper, visible door hinges and Citroen has removed the two rear doors, leaving just two front ones made from plastic. To get into the back, the rear panels have hollowed-out step holes to allow rear-seat passengers to climb in, and just like the C4 Cactus, the Cactus M uses Citroen’s Airbump technology – but in a new design – which also features on the bumpers.

The rear tailgate is also plastic and folds down to reveal a pick-up loading bay. Lift up the boot floor and there’s the roof that can only be erected by hand. To keep the fabric roof rigid, a compressor pumps air through three tubes that traverse the windscreen and rear roll-over hoop. The quirky roof can also double up as a tent that fixes to the back half of the car, while the back seat can fold down to create a bed. 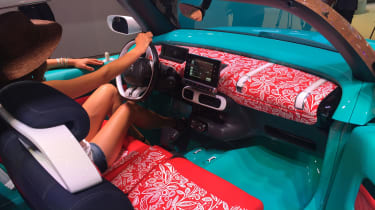 Inside, the Cactus M is completely waterproof. Peel back the rubber floor mats and plugholes allow water to escape the foot-wells, and the seats are made from the same material as wet suits. The dashboard is made from the same floral patterned material, and in keeping with the surfing theme, two surfboards can be lashed to the windscreen and rear hoop – both of which are covered in wooden veneers.

Lead designer Frederic Duvernier told us he first sketched out a modern day Mehari with a Cactus front and rear in 2010, and he and his team worked flat out to create the Cactus M for the Frankfurt Motor Show.

“A concept car would normally take around a year to build but the Cactus M took just six weeks,” he told us. “We took a standard Cactus from the production line and created the car you see here – it’s got to be a world record!” 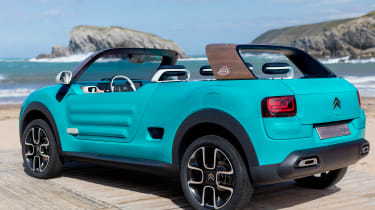 Duvernier – who was also responsible for desiging the C4 Cactus and other recent Citroen concept cars – showed us around the car and explained the detailed changes he made to the standard five-door crossover.

A brand new front bumper features, with tough-looking tow hooks and full LED headlights. Duvernier revealed that the jewel-like headlamps wouldn’t be used on a production Cactus convertible should it get the green light from company bosses, rather they preview what we can expect from future range-topping Citroens like the next C5 saloon. They would be too expensive for the C4 Cactus, which is primarily designed to be an attractive crossover that focuses on value for money. 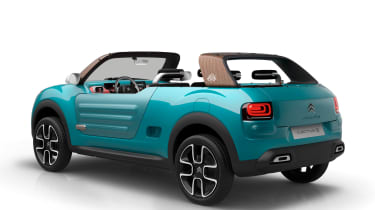 Citroen believes the Cactus M is another example of its newly found confidence and perfectly sums up its vision of producing functional cars that are still stylish. “It’s well documented we went through a dark period during the 2000s when we were hesitant in our designs and perhaps copied our rivals too much,” Duvernier told us. “Now though, we have found our way and that’s to go back to our roots.”

Under the bonnet lies the same 1.2-litre turbo petrol from the C4 Cactus and a fully automatic six-speed box not used in the five-door crossover before. It’ll make its debut at the Frankfurt show alongside the Aircross, another of Duvernier’s designs that we saw at the 2015 Shanghai Motor Show.

Citroen insists the Cactus M is purely a concept for now, but it’s another sign that the French firm is seriously considering adding more SUVs to its line-up. Plus, with Citroen on course to shift 10,000 Cactuses in the UK this year, it’s safe to suggest the brand is keen to add another derivative to the range.