Citroen DS3 Cabrio Racing will be officially unveiled in January, before going on sale shortly after 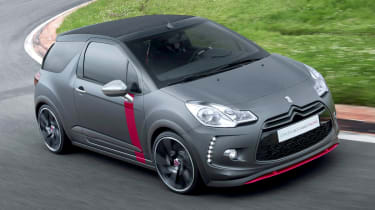 The Citroen DS3 Cabrio Racing, previewed by a concept (pictured) at this year’s Goodwood Festival of Speed, will be officially revealed in January and will go on sale soon after, Auto Express has learned. And you can expect much of the show car’s styling to be carried over. That even includes the Moondark matt paint, which is supposed to feel like a shark’s skin to the touch.

Upgrades to the interior will reflect the concept, too, so the Racing Cabrio should be fitted with bucket seats finished in the stylish 'watch strap' embossed nappa leather from the larger DS5, along with extra Alcantara touch points throughout.

It’ll share the same 1.6-litre turbocharged engine as the hardtop DS3 Racing, producing 204bhp, which should allow for acceleration from 0-62mph in 6.5 seconds – exactly the same as the hatch – despite the 25kg increase in weight.

Chassis tweaks from Citroen’s WRC team, including larger brakes, firmer springs and sharper steering should all help improve the way the newcomer handles.

The DS3 Cabrio Racing will also preview some of the future themes of Citroen’s future DS models. The red stripes inside and out the Goodwood Concept are the signature colour of the DS range, and will be fitted to more of the high-end models in future.

Expect to see a production run limited to around 400 models worldwide, with the UK set to get a large chunk of those because of its status as Europe’s most popular convertible market. Considering the DS3 Racing hardtop cost £23,100, you can expect the Cabrio version to cost around £25,000.