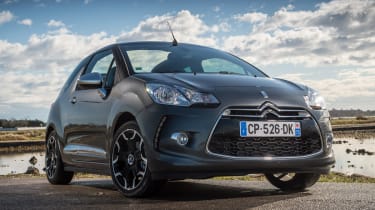 Considering the main rivals of the DS3 hatch are the MINI and the Fiat 500, when both companies created the MINI Convertible and the Fiat 500C, it was only a matter of time before the DS3 Cabrio arrived.

Unlike the MINI Convertible, the DS3 Cabrio doesn't get a complete folding drop-top - like the Fiat 500C, the DS3 hatchback's B and C-pillars remain in place, and the Cabrio gets a large folding canvas roof.

That means the DS3 Cabrio is just 25kg heavier than the hatch, so the handling isn't affected too much. What's more, the strong engine range, comprised of one 1.2-litre petrol unit and four 1.6-litre units producing varying levels of power, still performs well despite the extra weight.

The DS3 is still sharp to drive even in Cabrio form, and like the hatch, it has very positive and accurate steering. In fact, the only sign that points to a lack of rigidity is some minor shake from the rear window over severe bumps.

Like the hatch, the DS3 Cabrio's ride is a little firm (especially with the 17-inch alloy wheels), but it's softer than a MINI and there's not much body roll while cornering.

The electric roof has three settings. Press the button above the rear-view mirror once and it automatically retracts into the C-pillar. Press it a second time, and the roof is fully retracted. It's worth noting though, that it will block your rearward view when folded.

When returning the DS3 Cabrio's roof, it stops where a regular sunroof would, but a double-press of the button will see it stop where the occupants like. What's more, the roof can be raised or lowered at speeds of up to 75mph.

While the DS3 Cabrio is 25kg heavier than the hatch, fuel economy and emissions aren't terribly affected. The entry-level DSign is powered by a 1.2-litre petrol unit, which returns 57.6mpg and CO2 emissions of 112g/km. The mid-range DStyle comes with a choice of three 1.6 engines, the most economical of which is a diesel that manages 78.5mpg plus 95g/km of CO2.

The DS3 Cabrio DStyle can also be specced with an automatic gearbox, which means the car returns 154g/km of CO2, and returns 42.2mpg. The other engine available on the DStyle model manages 49.6mpg and 132g/km.

The DSport with its 153bhp engine is the most powerful DS3 Cabrio in the range, but it'll still return 47.7mpg and emit 137g/km.

There's no denying that the DS3 hatch is a great looking car and thankfully, the same can be said for the Cabrio.

As it follows the Fiat 500C's approach to convertibles, the DS3 Cabrio retains the hatch's distinctive shark-fin B-pillar and floating-effect roof. There are also plenty of alloy wheel and body-colour options, and the scope for personalisation is also carried over to the interior, with the option of a new blue leather for the seats. There are also two optional colours for the roof. 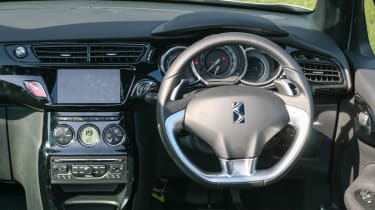 The DS3 Cabrio is also fitted with stylish mirrored LED rear-lights, and a stylish chrome strip on the bootlid. However, it doesn't look too much different from the normal hatch, so buyers will have to look elsewhere if they want a small convertible with presence.

The DS3 Cabrio Racing looks racy with its matt grey paint and red detailing. There's also a Pink special edition, which doesn't look as great, thanks to its bright pink roof and other exterior highlighting.

The DS3 Cabrio proves you can have style and substance in a small package. Citroen has a long history of being innovative and this is shown in the boot lid mechanism. It's fitted with a clever rotating hinge mechanism that allows it to swing up almost vertically, meaning the boot can be accessed in tight spots. However, if you have the roof completely folded, it'll have to be moved to its mid setting before the boot will fully open.

Boot space is impressive at 245 litres, making it just 40 litres smaller than the DS3 hatch and considerably bigger than the MINI Convertible and 500C, which have 125 and 185 litres respectively. However, the boot opening is like a letterbox, which makes access tricky. The 60:40 split-folding rear seats remain, and while there’s space for five, headroom in the rear is slightly compromised.

Citroen has worked hard to improve its reputation for poor reliability - especially on its flagship DS range - so the DS3 Cabrio should be a reasonably safe option. There are no major reliability issues on the DS3 hatch on which it's based.

The standard DS3 scored the maximum five-star rating in the Euro NCAP crash tests, so the Cabrio should be pretty safe too. PLus, by keeping the roof rails in place, the Cabrio's passengers are reasonably well protected should the car roll over.

The only area of concern is the canvas roof. Developed between Citroen and specialist firm Webasto, it's made up of 180 parts meaning there's plenty to go wrong - happily, the technology has been proven in other cars. 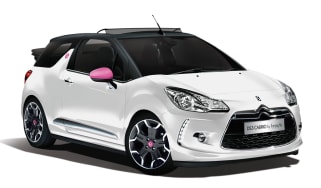 Citroen once again teams up with Benefit Cosmetics to create a special edition DS3, on sale now for £18,745
Citroen DS3 Cabrio Racing review 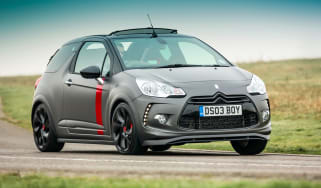 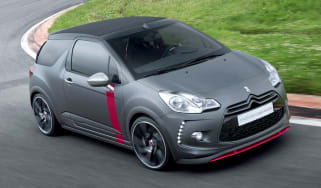 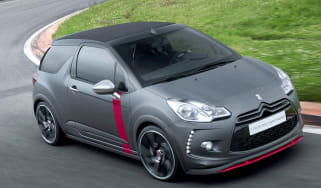 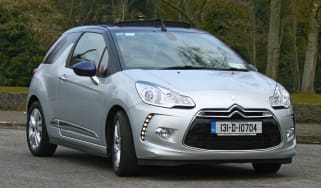 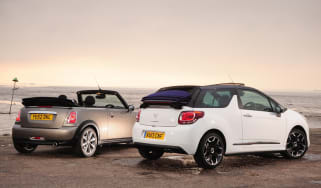 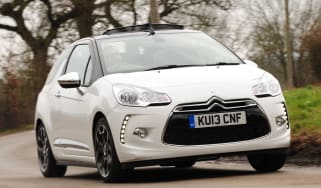 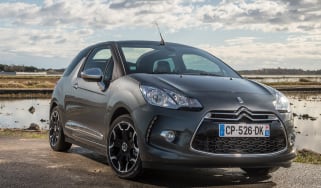 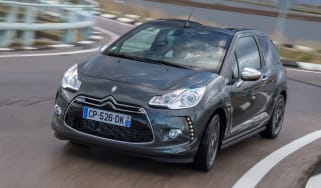 Our verdict on the new soft-top Citroen DS3 Cabrio, which is set to take on the popular Fiat 500C
Skip to HeaderSkip to Content