We've already been impressed by the petrol Citroen DS3 Cabrio. So what's the diesel like? 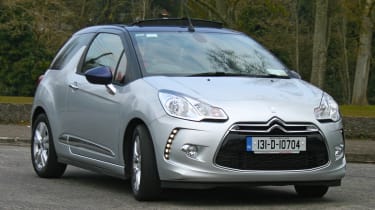 We already knew the Citroen DS3 Cabrio looked great and was just as good to drive as the hatch. So the addition of a 74mpg diesel is certainly appealing. The engine is a great all-rounder, too, pulling strongly at low speeds and staying quiet as you up the pace. However, we’d steer clear of this jerky EGS auto.

You may have noticed that the new Citroen DS3 Cabrio is available in the UK with three petrol engines, but no diesel.

A diesel version does exist in other markets, though, and is tipped to arrive here later this year. So we drove an Irish car to bring you an early verdict.

Marrying wallet-friendly fuel economy of 74mpg and low CO2 emissions of 99g/km with the open-top’s cheeky styling, it looks like a winner on paper.

And first impressions of the 1.6-litre diesel are favourable – pulling power from low revs is impressive, making it nippy around town, yet just as well suited to long motorway trips.

However, our test car came fitted with the EGS (Electronic Gearbox System) automatic box, which is also expected to arrive in the UK this year. This has the internals of a six-speed manual, but the clutch operation is taken care of automatically. It delivers impressive efficiency, but makes progress frustratingly jerky.

Take control with the shift paddles (or by tapping the lever back and forth) and things improve considerably – especially if you come off the throttle as the gears change. But this system is still a far cry from the swift twin-clutch boxes in rivals like the VW Polo.

The diesel will also be offered with a five-speed manual, which makes a lot more sense, especially considering this engine is almost as refined as the 1.6-litre petrol, as well as much more efficient.

Elsewhere, the DS3 Cabrio is a bit of a mixed bag when it comes to practicality. The peel-back roof design allows enough room for five inside, and even split-folding back seats. But when the roof is at its lowest, rear visibility is atrocious. Parking sensors help at low speed, yet on the move the rear-view mirror is redundant.

We expect the diesel will only be offered in DStyle trim, which has 16-inch alloys and air-con, but no Bluetooth or climate control. If you can stretch to it, there’s lots of customisation available, including three roof finishes and nine wheel designs.