Our verdict on the new soft-top Citroen DS3 Cabrio, which is set to take on the popular Fiat 500C 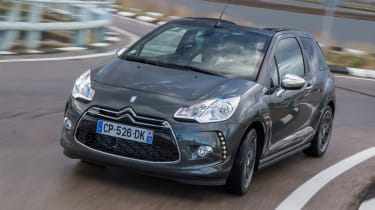 The DS3 Cabrio is £2,625 more than the hatch on which it’s based. The Fiat 500C is £2,000 more, and even the MINI Convertible is £2,500 over the hatch. However, the canvas top suits the DS3 nicely. The fact that Citroen left the roof pillars in place means that the Cabrio retains some of the DS3’s most distinctive design features, while the new bootlid is a novelty. Being able to drop the roof at speeds of up to 75mph means that you can make the most of a break in the weather better than any of the DS3’s rivals, while the roof’s compact design doesn’t harm practicality or the driving experience too much either.

Following the MINI Convertible and the drop-top Fiat 500C, there’s now a Citroen DS3 that can be opened to the elements with the press of a button. The new DS3 Cabrio is a logical extension of the successful DS brand, and is expected to account for around 10 per cent of DS3 models sold when it goes on sale in the spring.

The DS3 Cabrio follows the same route as the 500C in that it’s not a complete drop-top. Instead, the Cabrio features an electrically folding canvas roof that furls up on top of the bootlid, leaving the roof rails and the B and C-pillars in place. And while it saves Citroen from having to invest on completely reengineering the car, the aesthetics of the DS3 are preserved, too, as the cool shark fin B-pillar and floating roof remain. It also means that the weight penalty for the roof mechanism is minimised to 25kg over the regular DS3.

Around 90 per cent of DS3s sold so far have featured a two-tone paint job. To ensure that continues, Citroen will offer three choices of canvas roof: black, a grey checked pattern that features the DS3 logo, and a fetching Infinite Blue which matches the new dark blue leather that has been added as an option for the Cabrio interior. Other design tweaks include the addition of the latest Survolte concept car-inspired DS3 tail-lights, which have a mirrored oval LED motif that seems to disappear on forever into the car. There’s also a chrome strip which runs along the top of the bootlid.

The lid itself is a smart piece of engineering. Press the button on the bottom edge of the bootlid and it doesn’t pivot on hinges along its top edge as you’d expect. Instead, it swings up vertically on clever rotating brackets, so you can open the boot even when parked in tight spaces. However, you can’t open the boot when the roof is in its lowest setting. The boot itself is a generous 245 litres – just 40 litres less than the DS3 hatch, but the boot opening is tiny and makes loading bags a bit awkward.

There are no major mechanical changes to the DS3 Cabrio as its bodyshell remains almost as stiff as the hatchback. It feels solid to drive, too. The small weight increase is barely felt, and the top-spec 155bhp 1.6-litre turbo engine is as strong as ever. The steering is sharp, too, with very little extra flex being fed back though the wheel and the ride is firm but not uncomfortable.

The folding roof adds to the DS3’s appeal. When it’s up, there’s barely any more noise than the regular hatch, thanks the hood’s three-layer insulation. Press the button at the top of the windscreen once and the roof whirs back quickly to just behind the heads of rear-seat passengers. However, this can make the cabin quite boomy and windy at speed, like someone has opened a window on a normal car.

The roof’s leading edge can also hit the heads of taller rear-seat passengers. It’s better to press the button again to get the glass rear window to fold forward onto the fixed bulkhead, which replaces the parcel shelf of the hatch and let the canvas furl up on top. Rear vision is somewhat restricted, as you’d expect, but the interior suffers much less buffeting in this position. The roof can be raised or lowered at speeds of up to 75mph, taking 16 seconds to close from fully open. You can also power the roof to any desired position, just by pressing the button twice.