Third-generation Dacia Sandero prototype has been spotted for the first time, but in heavy camo 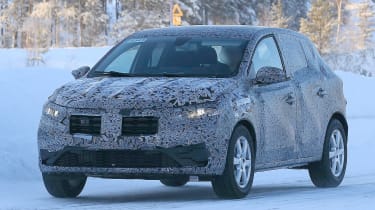 This is our first look at the next-generation Dacia Sandero. We expect it’ll be revealed in early 2021 with a new look, an updated engine range and - potentially - a new platform.

Most of this mule's styling is still hidden under heavy camouflage, but the shape of its headlamps, flanks and rump suggest the next-generation model will bear a strong resemblance to the outgoing car. The new Sandero will also be slightly longer than its predecessor if these shots are anything to go by - it’s visibly stretched in comparison to the stubby proportions of the current budget favourite.

The current Sandero is based on an ageing Clio platform in production since 2002, and there’s not much to suggest that this setup has much life left in it.

Dacia could be poised to switch the Sandero to the same CMF-B underpinnings as the latest Clio and the new Nissan Juke, possibly raising the price of the car in and its respective position compared to the Clio from a quality perspective.

A new platform raises questions as to where the new car will be built though. And in this scenario, to keep costs down it’s unlikely to be available with the Renault-Nissan's expensive mild-hybrid and plug-in hybrid powertrains, sticking instead to the Sandero's familiar range of small-displacement petrol and diesel engines.

As such, we could see Renault's 71bhp naturally aspirated 1.0-litre three-cylinder petrol engine at the lower end of the Sandero line-up, with a 128bhp four-cylinder petrol sitting above.

An upgraded platform would also mean that the new Sandero would receive a decent technology boost, but the Clio's infotainment system and digital instrument cluster wouldn’t make the leap, as both may be too expensive for the Sandero's famously low price-point.

What do you make of the new Dacia Sandero? Let us know in the comments section below… 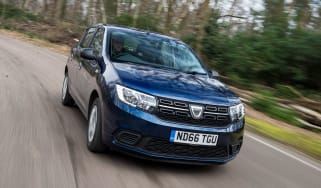