Two new Daihatsu Copen concept cars, both called the Kopen, have been revealed 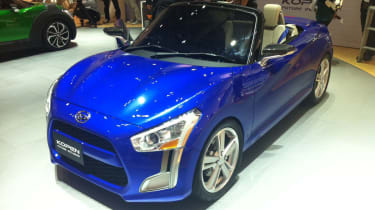 The Daihatsu Copen roadster is to be revived, with the manufacturer revealing two Copen concept cars at the Tokyo Motor Show 2013. Both cars show what a new verison of the Copen could look like, and both share the new Kopen name.

We first heard of a revival of the Daihatsu Copen name back in 2011 after an insider claimed a new model was being developed. Happily, that information proved to be accurate and the two concepts pictured preview a conventional roadster called the RMZ (blue) and a more rugged, SUV-inspired model called the XMZ (green).

Both will feature a retractable folding metal roof and measure in at 3,395mm long and 1,475mm wide, meaning the new Copen concept is 145mm shorter than a Volkswagen up!. Power will come from a 660cc three-cylinder engine – similar to the engine in the new Honda S660 concept – mated to a CVT gearbox.

Inside, there’s a mix of leather, suede and carbon fibre along with a flat-bottomed steering wheel. The interior appears to be fairly minimalist, with all the controls and buttons found on a touchscreen fitted to the centre console. There’s also a digital readout and push-button start.

Despite being the first Japanese manufacturer to start selling cars in the UK back in 1966, Daihatsu recently pulled out of the European market due to slow sales. The firm is hoping the new Copen will reignite interest in the brand.