You wait years for a new US car company to be launched in the UK, then two come along at once. Just as we were starting to get used to the idea of Cadillacs on British soil, a range of Dodge models is about to arrive over here, too. 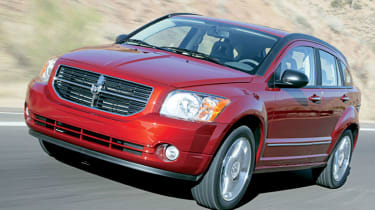 Dodge has arrived in the UK! When the rejuvenated American brand bursts into Britain this summer, it will bring with it a sharply styled, family hatchback that offers everything drivers on this side of the Atlantic demand. Sur-prisingly smooth on tar-mac and with a hot SRT version just round the corner, buyers are likely to give the US car a warm welcome.

You wait years for a new US car company to be launched in the UK, then two come along at once. Just as we were starting to get used to the idea of Cadillacs on British soil, a range of Dodge models is about to arrive over here, too.

Making its debut in July as part of the DaimlerChrysler group, the Dodge Caliber is the brand's first offering. A five-seater family hatchback with front-wheel drive, it's designed to get buyers familiar with the ram's head badge and 'grab life by the horns' slogan before the company's full range goes on sale.

Unveiled in production trim at January's Detroit Motor Show, the newcomer features the aggressive looks that have made Dodge the fifth biggest car seller in the States. Ahead of its summer UK launch, Auto Express got the chance to drive the entry-level 1.8-litre petrol version, tipped to cost about £12,000.

Compared with previous US offerings that have crossed the Atlantic, the Caliber is very refined. The 148bhp car is no hot hatch, but performance will be adequate for most buyers. Push the engine through the manual gears and it makes a surprisingly pleasant noise, too.

What's more, the steering has been well engineered. Drive into a corner at speed and the nose turns in sharply, with minimal body roll. It's not up to the standard set by Volkswagen's Golf and Ford's Focus, but it's better than American imports of the past.

The Caliber also offers a reasonably supple ride. The car we drove had US suspension settings, but we have been assured there will be more fine-tuning before July. Overall, the dynamics are impressive. It's as if the Americans have finally realised that by taking account of European tastes, they can ship their models wholesale across the Atlantic.

The interior is also an improvement on the Caliber's US rivals. Available with various coloured centre consoles, designed to match the seat inserts, it will appeal to young buyers. The stereo features MusicGate, an optional speaker on the inside of the tailgate which flips down so your music can be heard outside the car - ideal for summer picnics! And if you need to change a wheel at night, there's a removable torch built into the headlining above the boot, which is permanently on charge.

As well as this 1.8-litre manual car, British customers can choose a 158bhp 2.0-litre auto, while diesel fans are likely to prefer the 136bhp 2.0 six-speed model, with its VW-sourced oil-burner. Although the 2.4 petrol variant offered in the US won't be coming here, a turbocharged version of it will feature in the performance flagship, the Caliber SRT-4, when it goes on sale here early next year.

Spec details have yet to be finalised, but two models are likely to be offered initially in the UK: ST and SXT. The base car will come with air-con, side curtain airbags, electric heated and folding door mirrors and keyless go. A CD player will also be part of the package. The SXT adds a chrome grille and body-coloured door handles, plus cruise control and the coloured dash/seat options.

As a funky alternative to the Focus and Golf, the Caliber's styling will not appeal to everyone, but then UK sales aspirations aren't massive. The unique look should turn a few heads, and the acceptable performance will transform some admirers into buyers.