We should applaud Dodge for its approach. But it is simply not very polished or well built. 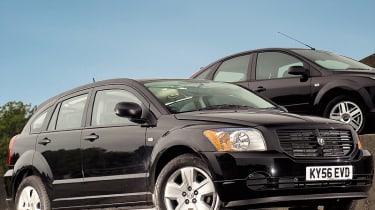 Driving The Dodge is a tall car with a high ground clearance. This seems to compromise its handling. Body control is poor and hard acceleration can easily provoke torque steer - there is precious little feel through the unresponsive steering and the car corners more like an SUV than a hatchback. Thankfully, the ride is smooth, and the Caliber is far happier cruising on motorways than tackling twisting back roads, although wind noise is intrusive at high speeds. Diesel models will form a high proportion of sales, and the VW-sourced 138bhp 2.0-litre is strong and urgent, pulling well in every gear. It's mated to a slick six-speed box and, even though the clutch bites high, the Dodge is easy to drive around town - the power delivery is smooth and turbo lag minimal. It performed well at the test track too, hitting 60mph in 9.7 seconds.

Marketplace Breaking into the ultra-competitive family hatchback market is no easy task. That's why Dodge has gone for such an unusual design with the Caliber. The car's high ground clearance, large wheelarches and SUV styling take a little getting used to - particularly at the rear, with its squared-off bumper and ungainly lights. But the chunky proportions are an illusion - it's not as big as it looks. It's closely comparable with a Ford Focus. The Caliber comes with a choice of two petrol engines and that VW diesel, while there are five trim levels. It competes with mainstream models such as the Vauxhall Astra, Honda Civic, Volkswagen Golf, Seat Leon and Citroen C4, as well as budget offerings like Kia's Cee'd.

Owning The boot offers a generous amount of space. Although it's not that deep, it still has a healthy capacity whether seats are up or down. There are some clever, flexible touches as well. The interior light pops out and can be used as a torch, while buyers also benefit from a feature called MusicGate - basically two speakers which flip down from the hatch when it is open. The practical feel continues in the passenger compartment. Rear head and legroom is good; in fact the Caliber feels more spacious than a lot of rivals, though it's a shame the seats aren't more comfortable, while reach adjustment for the steering wheel is missing, and the seat headrests look dated and feel cheap. Indeed, much of the cabin feels as though it has been built to a budget. The door-locking pins and interior handles are two obvious areas where the plastics feel brittle and mark easily. We have few complaints about the dashboard design, however. It's simple and well laid out, with an attractive chrome surround, while the white dials illuminate green at night, giving a classy look. What's more, when you consider the healthy amount of standard equipment all models offer, the Caliber is amazingly well priced. However, retained values predict it'll have a tough time on the used market, while service intervals are short at a mere 9,000 miles, and our diesel test car retuned an unexceptional 35.7mpg - some way off the optimistic 46.3mpg official average. 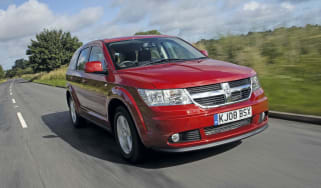 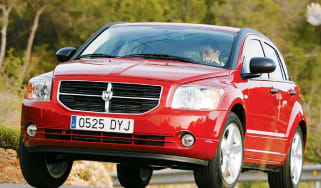 It's a family affair for Dodge's latest offering. We find out if the all-new Caliber SXT Sport has got what it takes
Dodge Caliber 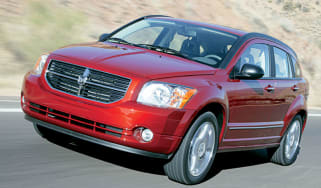 You wait years for a new US car company to be launched in the UK, then two come along at once. Just as we were starting to get used to the idea of Cad…
Skip to HeaderSkip to Content