It's a family affair for Dodge's latest offering. We find out if the all-new Caliber SXT Sport has got what it takes 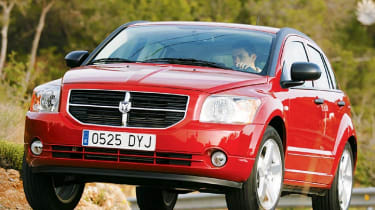 The Caliber is a unique model in a sector where the norm is to blend in. Its bold looks and price are sure to appeal. However, boot space is tight, and cabin quality lags behind the class leaders. What's more, the Caliber has the dynamic drawbacks of an SUV with few of the benefits. So while Dodge dares to be different, the Caliber's strong points are limited.

Forget the loud, brash Viper - Dodge is about to butt into the family car market with the new Caliber. It's the first mainstream model to wear the distinctive ram's-head badge, and it's aimed at attracting potential Ford Focus and Volkswagen Golf buyers who want to stand out from the crowd.

We've already driven the car in the US, but now the Caliber has hit Europe, will it shoot to the top of the class? As with models from Dodge's stable-mates, Chrysler and Jeep, the Caliber's styling is pure Americana.

Designers have gone for a shrunken SUV look, giving the hatchback swollen wheelarches, big alloys and bold headlamps. The off-road crossover appearance is a result of the Dodge's high ground clearance, but don't be fooled into thinking this is a 4x4. While an all-wheel-drive Caliber is sold in the US, European variants feed power only to the front wheels.

So does the Dodge have the practicality of a genuine off-roader? Unfortunately not. There's plenty of space for front and rear passengers, yet the boot is small for this class. But there are some nifty touches, such as the neat iPod holder built into the armrest, and an optional boot-mounted, fold-out sound system. Still, we wish Dodge had concentrated on quality rather than gimmicks.

Plastics are hard and cheap, and there are too many sharp edges. Rivals are leagues ahead. On the road, the firm aims to establish performance as a key plus point, offering 1.8 and 2.0-litre petrol engines, plus its own version of VW's 2.0 diesel. It develops 148bhp and will account for most UK sales.

While it's not the quietest, the CRD is punchy and flexible, thanks to the standard six-speed manual gearbox. In fact, the torque can be too much for the chassis. But the Caliber is nowhere near as agile as the Golf, Focus or Honda Civic. Its tall body rolls through bends with little steering feedback.

However, there is one aspect of the Caliber that rivals can't match - price. Loaded with standard equipment, entry-level variants start at £11,495, while the flagship diesel is £15,430. It's far from perfect, but the Caliber's head-turning looks and bargain price should be enough to make it a hit in the UK.