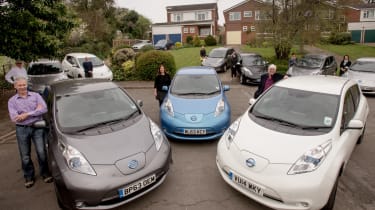 The Government should implement a quota requiring at least 15 per cent of vehicles sold by car manufacturers to be fully electric, campaigners have said.

Global Action Plan and the FIA Foundation - two charities that both campaign on environmental issues - claim that 59 per cent of two-car families would be able to switch one of their internal combustion engined cars for an EV without any inconvenience.

This 59 per cent - taken from a survey of 1,004 parents with two or more cars - have access to off-street parking, meaning they could charge an EV easily, and never drive their ‘second’ car more than 50 miles in one day.

If they were all to swap one of their petrol or diesel cars for an EV, there would be approximately 5.7 million more electric cars on the road. Fewer than one per cent of the 32 million cars on UK roads as of now are fully electric.

According to the survey, 90 per cent of two-car families think it should be a priority for the Government to regulate car manufacturers ao that they have to sell more affordable, zero-emission vehicles. Furthermore, 69 per cent say they dislike causing air pollution as they drive, and want manufacturers to focus on reducing exhaust emissions.

Chris Large, co-CEO of Global Action Plan, said: “The car industry often cites the long family holiday and availability of public charge points as a major reason that drivers won’t go electric, but the facts are that for one in six cars on the road - the ‘second’ car in 5.7 million households - these are not problems and electric cars are the perfect vehicle.”