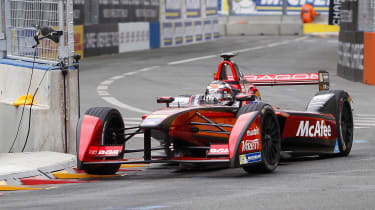 The American electric car company Faraday Future is joining the FIA Formula E electric racing championship for the 2016-17 season, it was announced today.

Faraday will enter the series by becoming a technical partner and title sponsor of the existing Dragon Racing team, retaining its current drivers Loic Duval and Jerome d’Ambrosio for the championship’s third season.

Speaking at the announcement in London, Marco Mattiaci, the former Ferrari executive who became Faraday’s chief commercial officer earlier this year, said: “Formula E has placed a significant emphasis on electric performance and connectivity, which makes it a great fit for Faraday Future. The series has leveraged a community of fans and embodies the competitive spirit that we also share.”

Mattiacci will oversee the company’s involvement with Formula E and the partnership with Dragon Racing, while the firm’s global R&D chief Nick Sampson and his team will lead the technical co-operation.

“Partnering with Dragon Racing allows us to further showcase our electric vehicle leadership and technical capabilities in one of the most exciting formulae in the world,” said Sampson. “I clearly see Formula E as the right venue to challenge our engineers and technologies in the most extreme performance conditions.”

Formula E CEO Alejandro Agag added: “We’re thrilled to welcome Faraday Future into Formula E. It’s a brand that’s targeting the highest standards in terms of design, R&D, and manufacturing of electric cars. We couldn’t be happier that they have chosen Formula E to challenge some of the greatest car companies in the world.

Find out more about Faraday Future's FFZERO1 concept car, revealed at this year's CES show in the US...