70 Ferraris congregated in the capital to mark 70 years of the prancing horse. Check out our exclusive pictures 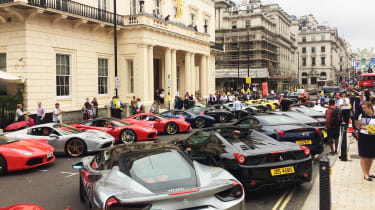 Ferrari is celebrating 70 years in the car industry in 2017, and celebrations came to the UK yesterday with a large parade of cars from the famous Prancing Horse hitting the streets of London.

Though the bones of the Italian supercar company were constructed in 1940, it wasn’t until 1947 that the first car to bare Enzo Ferrari’s name surfaced – the 125 S.

In the 70 years since the firm has produced some of the world’s most desirable and valuable performance and racing cars, and a selection of 70 Ferraris were amassed yesterday lunchtime to mark the milestone. 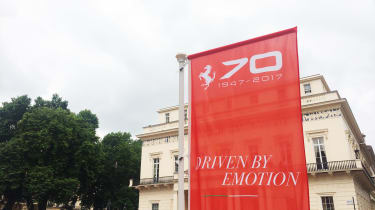 With the backing of UK based luxury car dealer H.R Owen, the Ferraris and their owners assembled in central London, just around the corner from the Royal Automobile Club, before parading away to an unknown location to continue the celebrations.

458 Italias and 488 GTBs proved to be the most popular cars in attendance, but one or two rare Ferraris also appeared.

One V12 powered, 6.3-litre, 769bhp, £339,000 F12tdf was tucked away in one corner of the square, while a 575M Superamerica was also present – just one of 559 produced. Crowds were also drawn towards a 550 GTZ Zagato – an exceedingly rare coachbuilt model based on the 575M, while a special LaFerrari Aperta badged for the occasion was placed front and centre.

Check out our full exclusive gallery above and below to see Ferrari’s 70th anniversary celebrations in London. 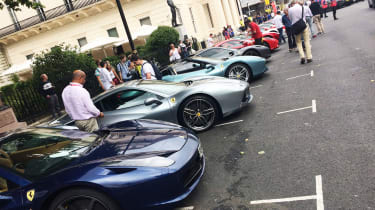 What's your favourite Ferrari of the last 70 years? Let us know in the comments...