Bespoke Ferrari SP3JC is based on the F12tdf, and gets a Pop Art inspired livery 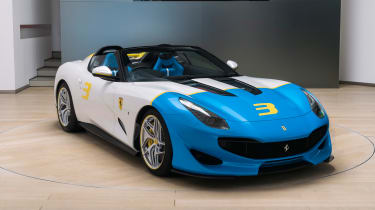 Called the SP3JC, the bespoke model uses F12tdf running gear, and is the culmination of two years development with close involvement from its new owner throughout.

Designed by the Tailor-Made programme designers at the Ferrari Styling Centre in Maranello, the SP3CJ is an open top two-seat gran tourer which Ferrari says harks back to the brand’s V12-engined spiders of the 1950s and 60s.

Compared to the F12tdf, the car’s front and side profiles have been redesigned to further emphasise the front engine layout. With the roof removed, the bodywork behind the seats has been dramatically overhauled also, with two roll-hoops and a completely restyled rear fascia. A similar rear diffuser is equipped, but above it sits a pair of new horizontal slashes, while the taillights are also brand new. 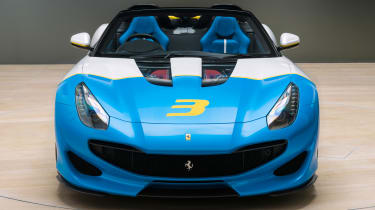 Ferrari explains that the colour scheme reflects the customer’s passion for Pop Art. The base colour of the SP3JC is Bianco Italia white, while the nose of the car is finished in bright Azzuro Met blue. Giallo Modena yellow highlights are also present. Similarly, the interior is trimmed in blue and white leather.

With F12tdf running gear under the metal, the SP3JC uses a 6.3-litre naturally aspirated V12 producing 769bhp and revving all the way up to 8,500rpm. Performance figures have not been revdealed, though it'll likely match the 2.9 second 0-62mph time of the F12tdf, with a top speed well in excess of 200mph.