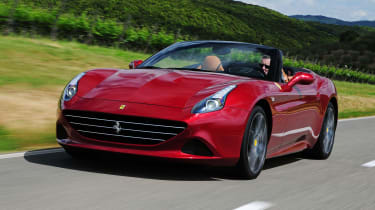 Since the Ferrari California was launched in 2009, Ferrari has sold over 10,000 of them, meaning it's the best selling model it's ever had. But now there's a new one - the California T, and the T stands for 'turbocharged' as this car has an all-new, twin-turbocharged V8 engine.

The latest Ferrari California has a smaller capacity than the outgoing car - 3.9-litres compared to 4.2-litres. However, the big news is the fact it's got this twin-scroll turbocharging, making it the first turbocharged Ferrari road-car since the F40.

Obviously things have moved on a long-way since then, and primarily the reason for the turbo was to try to the make the car more efficient, with better fuel economy and lower emissions - the typical downsizing stuff you'll find these days. Ferrari has succeeded in its efficiency drive, but happily they haven't sacrificed any of the typical Ferrari character from the California T's engine.

At 7,500RPM, the California's engine sounds amazing, and there's lots of torque and lots of power throughout the rev-range. It still maintains that typical Ferrari character of having a really positive and instant throttle response - as you get towards the rev-line, the power builds to a crescendo.

Overall, the turbocharged engine in the California T is really impressive engine and there's more than enough performance.

So, what are the raw statistics?

The California T's 3.9-litre engine has 70bhp more than the outgoing 4.2-litre unit, but there's 50 per cent more torque, and that's what makes this car feel properly quick.

The dual clutch gearbox is carried over from the old Ferrari California. The mapping has been reworked, so there's different software and it shifts down faster. There's also a lovely blip on the downshift, and like every other Ferrari in their range at the moment, the gearbox is pretty much perfect.

Ferrari have changed the steering wheel as well, so there are paddles that are bigger and easier to reach - it's pretty much the same as the Ferrari 458.

It's an interesting statistic that 70 per cent of people who bought the last California were new customers to Ferrari, but the Italian manufacturer says its customer base for the California T is very different from any of their other models.

It's been designed to be a Ferrari for use every day, so it's a little bit softer and a little bit easier to live with than some of their other sports cars - a nice blend between an open-top Grand Tourer and a pure, thoroughbred sports car.

The last Ferrari California was a little disappointing dynamically - there was quite a lot of roll over the rear of the car, and the weight of the hard-top roof really affected the way the car handled - so, Ferrari has made quite a lot of changes. The California T's chassis stays the same - same dimensions, same wheelbase, same everything, but Ferrari have tweaked the suspension, so the damping is 11 per cent stiffer and the steering has a 10 per cent faster ratio.

They've just sharpened it up, and you can feel that when you drive the California now. It does feel a little bit sharper than the old car.

When driving toward a fairly fast, sweeping corner, as you turn in, the car is very positive on the entry. You see the stability control light flickering a little bit as it senses a little bit of roll in the car, but it's very subtle. You don't really feel it working so much - you just see the lights and you're never left with a feeling of being a little bit uncomfortable in this car. It feels pretty well planted, and much more confident in the corners than the old car.

Traction on the exit of the slower speed corners isn't bad either. It's helped by the fact that obviously you don't get all the torque in the lower gears.

Ferrari has fitted a three-stage 'Manettino' button on the steering wheel of the California T, so you can choose between Comfort and Sport modes, as well as being able to turn the Stability Control off. Driving it in Sport you get a much sharper throttle response, and the steering is a bit quicker and weightier, and overall, it's pretty good.

Ferrari have improved and sped-up the steering ratio and it's a fast and positive turn-in. Sometimes the steering is so fast on some Ferraris, it can be a little bit un-nerving, so if that were to be combined with the slightly softer set-up of the California, that'd be a little bit of a problem, but actually in reality, it's not too fast. It's pretty much spot-on.

The other new feature on the California T that's carried across from other Ferrari models is the fact you can unhook the dampers from the Manettino, which means you can have the throttle, engine and steering in a Sport setting, but pressing the little damper button here on the steering wheel means you can have a softer ride, while you've got sporty for everything else.

Overall then, the Ferrari California has improved dynamically, but this car is also about long journeys and just cruising about with the roof down. The roof though, is the one thing that hasn't changed - Ferrari hasn't touched that. It's exactly the same as the old car and it comes up in 14 seconds, you can't do it when the car's moving - only when it's stationary.

Ferrari has changed the cabin though, so inside the California there's wider, more comfortable seats, and the dash has been lowered and smartened up a little bit. There's a new sat-nav system and where we've also got the latest Ferrari steering wheel, all of the indicators and controls are on the steering wheel, rather than on stalks like they used to be in the old car. Generally speaking then, the materials and cabin of the Ferrari California have been smartened up.

The Ferrari California T is going to cost you just under £160,000 and Ferrari's updates to this car mean that this car now strikes and even better balance between a comfortable open-top Grand Tourer, and an out-and-out sports car.

And the engine is a bit of a gem as well, and it really adds to the car's character - just put the Manetto into Sport and just really enjoy it.