Track-only Ferrari LaFerrari gets 1,036bhp, extreme aero package and will be used as test-bed for future technology. Yours for around £2m. 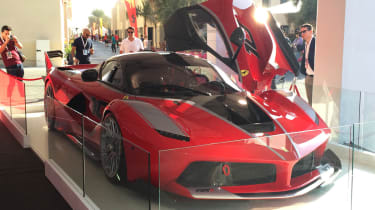 Just when you though the £1m, 950bhp, hybrid LaFerrari was the very pinnacle of what Ferrari’s engineering department was capable of, it’s taken the covers of an even faster and more extreme derivative – the LaFerrari FXX K - and we were there at the Yas Marina circuit in Abu Dhabi for the reveal.

Like the Enzo FXX that went before it, the FXX K is a track-only model only available to around 40 pre-selected buyers who are only allowed to drive the car at special Ferrari track days, such as the Finali Modiali event where the car made its debut. At these events, customers are asked to feed back telemetry data and their opinions to accelerate the development of future race and road car technology. The cost? €2.5m euros plus taxes, and that includes two years of racing and maintenence by Ferrari - after than you can pay more to keep on racing or take the car home to your marble-lined garage. 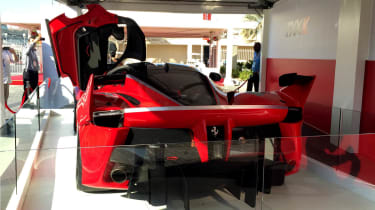 Although the basic layout of the HY-KERS hybrid powertrain (including the seven-speed twin-clutch gearbox) is retained, power from the 6.3-litre V12 is up from 789bhp to 848bhp thanks to new camshafts and intake manifolds (with peak power delivered at a head-spinning 9,250rpm), while the electric motor is boosted from 161bhp to 187bhp – pushing the total from 950bhp to 1,036bhp. Performance figures are yet to be released, but expect a very slight improvement on the standard LaFerrari’s sub-3 seconds 0-62mph time and 217mph top speed. 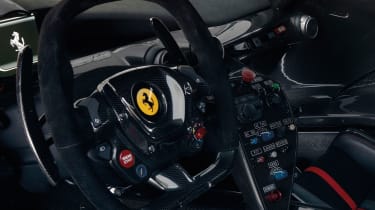 Nicola Boari, Ferrari's head of product marketing, was keen to stress that the FXX K isn't simply a track-version of the LaFerrari road car. "We use the carbon chassis and the powertrain from the LaFerrari as a starting point, but then transform it with everything we know from the track," he said. "The idea is to develop system that can be used on road cars like the next 458 and the next F12."

Precise 0-62mph and top speed figures haven't been released, but there are plenty of eye-catching numbers. The FXX K produces 540kg of downforce at 125mph, it is the first Ferrari ever with more than 1,000bhp and, perhaps most significantly, it can lap Ferrari's Fiorano track in 1m 14.5secs, compared to 1m 19secs for the LaFerrari. 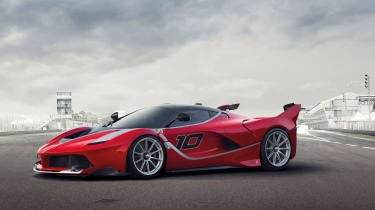 Because the FXX K will never compete in any FIA-sanctioned racing, it isn’t bound by any legislation, so Ferrari had free-reign to build its most extreme closed-canopy track car to date. For starters, the silencers have been removed, so expect the exhaust note to put Ferrari’s current F1 car to shame, while weight has been reduced by around 90kg compared to the road car.

Four newly-calibrated Manettino settings help get the most from the dual power sources, depending on the type of driving that’s required. ‘Qualify’ extracts the maximum performance for a limited number of laps, ‘Long Run’ optimises performance over a longer period, ‘Manual Boost’ offers maximum torque delivery when you ask for it and ‘Fast Charge’ quickly tops up the battery. 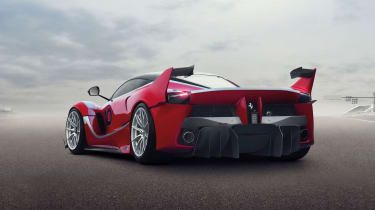 The extreme aero package begins with a jutting, two-layered front splitter that sits 30mm closer to the track surface. End plates and vertical fins at the front help to channel air more smoothly down the sides of the car, too. Fins protruding from the side skirts do a similar job for airflow over the rear wheel.

Perhaps the FXX K’s defining feature, though, is its unusual twin spoilers at the rear – these help to boost the efficiency of the active rear spoiler that now deploys by a further 60mm when required. As a result there’s 50 per more downforce in the low drag configuration and 30 per cent more in the more aggressive configuration. 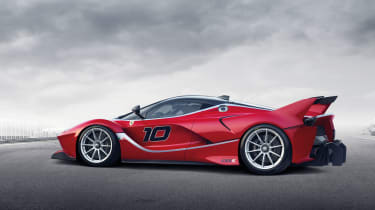 Pirelli slick tyres ensure the FXX K stays keyed into the track surface, while temperature, pressure and G-force sensors relay everything the engineers need to know about what’s happening at the tyre-road contact patch. The electronic differential, traction control and Side Slip Angle Control system are all specifically programmed to suit the car’s more aggressive set up, and can be controlled by a second five-position Manettino switch on the steering wheel.

Those lucky 40 customers will begin thrashing their new purchases around tracks from next year onwards, but according to bosses there's no chance of ever seeing an FXX K on the road. "If an owner chooses to modify it, it's no longer a Ferrari," a spokesman said.

Now find out about the fastest road cars on sale.