Ferrari LaFerrari: price, specs and all the details 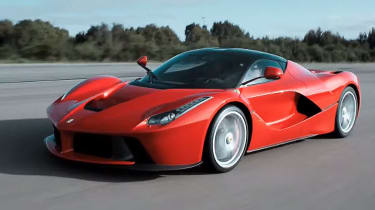 Ferrari has finally joined the battle to build the world's greatest sports car with its new Ferrari LaFerrari. It's set up to fight the impressive McLaren P1 and the Porsche 918 Spyder - and with its advanced hybrid powertrain and outlandish looks, it has certainly made an impression.

The LaFerrari was first seen at the 2013 Geneva Motor Show, and clearly got some hearts racing straight away: all 499 examples of Ferrari's hybrid hypercar sold out before the car was even available.

Formula One technology is abundant in the LaFerrari - as you might expect with a £1million price tag. It's set to go down in history as one of the most sought-after cars ever - so read on below to find out everything there is to know about it. 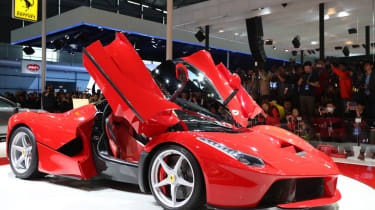 The LaFerrari's mid-mounted 6.3-litre V12 engine is electrically assisted by Ferrari's HY-KERS system to deliver a total power output of 950bhp. It's enough to make the LaFerrari's rumoured top speed of 227mph a realistic posibility and to see the car past 62mph in under three seconds.

The first drive reviews are out and now car fans accross the world are waiting with baited breath for news of the Ferrari LaFerrari's Nurburgring lap time after the war of oneupmanship that's been going on between the car's arch rivals, the Mclaren P1 and Porsche 918 Spyder. Reports that a race-prepared LaFerrari XX version of the car may have lapped the Nurburgring Nordschleife in a mind-blowing 6m 35s are only adding the furore as has the video of Fernando Alonso getting behind the wheel.

The performance figures of the Ferrari LaFerrari set a new standard for road cars. The 0-62mph sprint takes “less than three seconds”, 0-124mph takes “under seven seconds” and it can lap Ferrari’s Fiorano test track in Italy in under one minute 20 seconds – or five seconds faster than the Enzo.

Ferrari has only revealed that the LaFerrari's top speed is in excess of 217mph (350 km/h) but car is said to be capable of considerably more.

Power for the LaFerrari comes from a 789bhp version of the F12’s 6.3-litre V12, working in tandem with a 161bhp electric motor to drive the rear axle. Ferrari claims the motor’s high torque output at low revs allowed it to tune the V12 to produce its best at high revs.

The result is huge power on tap, at any speed, in any gear. Peak power arrives at a heady 9,000rpm and maximum torque of more than 900Nm is delivered at 6,750rpm. The tricky job of marshalling all that thrush is handed to Ferrari's seven-speed dual-clutch F1 gearbox.

A 60kg lithium-ion battery pack attached under the floorpan helps give the car a 35mm lower centre of gravity than the Enzo. It’s charged under braking and whenever the V12 produces more torque than required.

The batteries supply power to the electric motor, which is hooked up to a seven-speed dual-clutch gearbox. This hybrid system means that the LaFerrari emits just 330g/km of CO2 - an impressively low figure given the level of performance on offer.

The LaFerrari is 4,702mm long and 1,992mm wide with 2,650mm wheelbase. Advanced carbon fibre tub construction helps to achieve a dry weight of around 1,250kg. To cope with the awesome power and performance, the La Ferrari's front Pirelli P Zero tyres are bigger than on the Enzo, plus there’s a new generation of Brembo carbon ceramic brakes.

Active aerodyamics play a key role, too, and include a flexible front diffuser and underbody vanes, as well as an active rear spoiler and diffuser. This removes the need for an ungainly fixed rear wing, and the movable parts allow downforce to be maximised or drag reduced as required.

The design has been honed in the F1 team’s wind tunnel, and picks up where the Enzo left off with a low, pointed nose and gaping air intakes. The lower front wing, which appears to hang on a single strut, is a nod to current F1 cars, while the blacked-out roof flows seamlessly into the front and back ends. 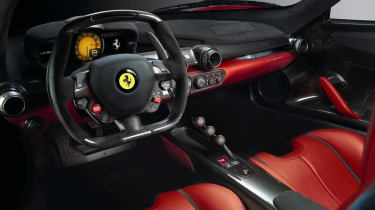 The cabin of the Ferrari LaFerrari is dominated by the steering wheel with all the major controls attached (another F1 reference) and a centre console that takes on a swooping wing-like shape.

The seats are an integral part of the carbon fibre tub and will be specially sculpted by Ferrari to suit each individual driver. There's potential to adjust the position of the brake and throttle pedals but a LaFerrari is very much a car that's personalised to fit its driver.

The LaFerrari is the latest in limited-series of Ferrari specials – following cars like the 288 GTO, F40 and F50, as well as the Enzo. It was limited to just 499 examples worldwide and they've all sold out. Prices were in excess of £1million.

Hypercar fans are spoilt for choice at the moment. Recent months have brought us not one, not two but three credible rivals in this rarefied sector of the market where dreams are carved from carbon fibre. The Ferrari LaFerrari is the last of the incredible trio to arrive but how does it compare to the Porsche 918 Spyder and the McLaren P1? Get the key stats from the table below...

Tell us which of these three you'd blow your £1m car budget on in the comments section below. Or have you got your eye on another hypercar option?