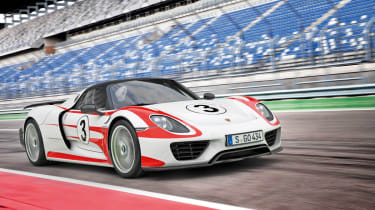 The Porsche 918 Spyder rewrites the supercar rulebook with its incredible performance and grip, and ability to glide silently in EV mode. It’s a technical masterpiece that delivers an awe-inspiring driving experience. The faster and lighter Weissach Package model is the ultimate 918, but you’d never be disappointed with the standard car.

Porsche has launched a super sports car every decade since the 550 Spyder in 1953. Yet even legendary supercars like the 959 and Carrera GT didn’t push the boundaries quite like the Porsche 918 Spyder.

Blending cutting-edge hybrid technology with track-proven motorsport engineering, the 918 has redefined the hypercar market. And, unlike rivals the McLaren P1 and Ferrari LaFerrari, there’s a choice of two versions.

Alongside the standard car, the Weissach Package 918 is designed for customers who want what Porsche calls “a more performance-oriented finish” and adds £60,000 to the already hefty price. Despite the cost, 25 per cent of buyers have chosen it.

Highlighting the composite construction, the roof, rear wing and windscreen frame are left in an unpainted carbon weave, plus there’s the option of sticker packs that take inspiration from classic 917 racer cars.

However, it’s the performance upgrades that make the Weissach – named after Porsche’s R&D and Motorsport centre in Germany – the ultimate 918. While the race-derived V8 engine, PDK gearbox, electric motors and lithium-ion battery deliver the same huge hit of acceleration and scalpel-sharp throttle response, the Weissach is 41kg lighter. Magnesium wheels save 14kg, while reducing sound insulation cuts cabin weight.

Both the driver and passenger seats get six-point belts, and more motorsport inspiration comes via the front wheelarch aeroflaps, which increase downforce, and drag reducing rear winglets.

The Weissach 918 is three seconds quicker than the standard car around the Nurburgring Nordschleife, so naturally the 918’s record-breaking lap of the track, in six minutes 57 seconds, was clocked with a Weissach car.

In reality, there’s the same quick, well weighted steering and phenomenal lateral grip as on the standard car, but its appeal lies in being the ultimate Porsche.