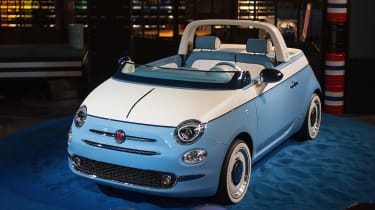 This year marks the 60th anniversary of the Fiat 500 Spiaggina ‘Jolly’: a quirky, open top beach cruiser version of the iconic city car. To mark the occasion, the Italian maker has revealed two special edition models: the Spiaggina by Garage Italia and the 500 Spiaggina '58.

The former is a joint venture between design house Pininfarina and Garage Italia - a custom house owned by Lapo Elkann, the grandson of former Fiat CEO Gianni Agnelli.

Like the original Jolly, the Garage Italia does away with a roof completely. Pininfarina is responsible for the structural work needed to beef up the 500’s chassis, including the installation of a roll hoop behind the front seats. 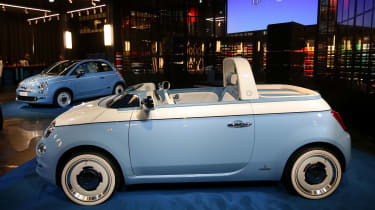 The rear seats have been ditched altogether. In their place is an open rear compartment that’s trimmed in slatted cork, that’s meant to mimic the decking on posh yachts. It’s even equipped with a shower to wash yourself off after a day at the beach.

Continuing the nautical theme, the show car also bears a low front deflector screen, though this can be replaced with a more traditional windscreen if buyers wish. The exterior is finished in a mix of pearl white and sky blue paint, with lashings of chrome trim on the mirrors and wheels - which are wrapped in white-walled tyres.

Inside, the Garage Italia model ditches the regular 500's seats in favour of a single bench, trimmed in waterproofed leather. The dash, the door cards, door sills and even the roll bar are all finished in leather, too.

The coachbuilt model will be built to order, so exclusivity is guaranteed. While the show car was left-hand drive, right-hand drive models will be available if a customer asks for one.

The changes for the Spiaggina ‘58 are less extensive. Based on the regular 500 Convertible, it features a unique pale blue paint finish and beige soft top. A white strip runs around the waistline of the car, while retro-themed 16-inch alloy wheels, chrome mirror caps and special badging round out the exterior changes. 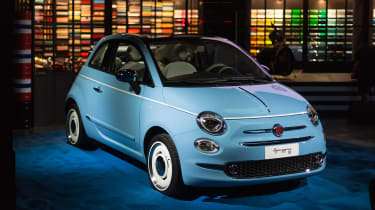 The blue exterior finish is carried inside, with a wide sweep of the finish covering the dashboard. The two tone seat fabric is stripy on its lower half to mimic a deck chair. Standard equipment includes air conditioning, rear parking sensors, cruise control and a seven-inch touchscreen with a TomTom sat nav, Apple Carplay and Android Auto.

Mechanically, the Spiaggina ‘58 is unchanged from the rest of the range. UK models will be offered with 1.2-litre petrol engine that produces 68bhp.

In a nod to the year of the original's debut, production is limited to 1,958 units. Prices have yet to be confirmed, but unlike the original Spiaggina, which cost twice as much as the standard 500, the Spiaggina ‘58 is likely to be much more affordable when it goes on sale in September.

What do you think of the Fiat 500 Spiaggina Jolly? Let us know in the comments section!