Meet the Qubo, Fiat’s latest offering for families on the move. It’s a five-seater passenger version of the Fiorini – the Italian firm’s new small van. 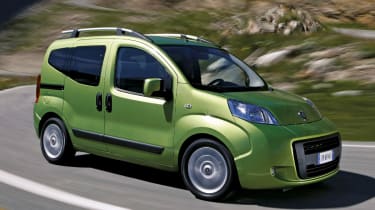 Basing the Qubo on an existing van is a great way of cutting development costs – and that’s a saving Fiat can pass on to the customer by offering a decent-sized family car for supermini money. The driving experience is hampered by a lacklustre engine line-up, vague gearchange and plenty of body roll in corners, but the well made interior, cheeky looks and funky range of colours go some way to making up for that. As with all recent Fiats, the Qubo has a certain appeal which should attract young families who put practicality before performance.

Measuring just under four metres long, the Qubo is larger than a Panda, but shorter than a Grande Punto. On paper, that means city car dimensions, but in the metal it appears to be much larger.

And thanks to clever design, Fiat has managed to pull off the same trick on the inside. There’s ample legroom for two six-footers to sit behind each other, a cavernous 330-litre boot with all the seats in place and twin sliding doors for easy access. The rear chairs can be folded flat or removed entirely – you can even collapse the front passenger seat to create a huge load space of 2,500 litres.

All the interior components feel well made and suitably car-like, while the only nod towards the Qubo’s commercial vehicle roots is exposed metalwork around the window frames.

The diesel version we drove was fitted with a 1.3-litre Multijet unit, producing 74bhp and 190Nm of torque. It’s an engine that needs to be revved hard before it starts to pull, so you spend most of your time working the rubbery five-speed manual gearbox. A six-speed automatic option on the oil-burner is slow but smooth, and suits the car’s character far better. For petrol fans, there’s a 1.4-litre model boasting 72bhp and 118Nm of torque.

The manufacturer says this is a car that you purchase not as a status symbol but because it’s cheap to buy, costs pennies to run and offers bags of practicality. But despite its dynamic downfalls, the Qubo has an air of funkiness about it that seems to have infected all recently launched Fiats.

Its chunky looks translate well from van to passenger car. And if you specify it with the Disco Green paintjob shown here, you will find it’s a car that won’t only go easy on your wallet but will put a smile on your face as well.

Rival: Nissan Note Also blurs the lines between MPV and hatch. Its spacious cabin and good-sized boot make the most of its modest dimensions, while light controls and an agile chassis mean it is fun to drive around town.