Legend is finally set to return, as we reveal secret plans for stunning Focus Coupe – and it’s gunning for Scirocco... 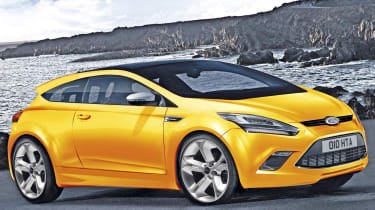 The Capri is back – as a hatch! These are the best pictures yet of the compact family car that looks set to be the must-have model of 2010 – it’s a new three- door version of the Ford Focus.

Just as Volkswagen has done with the stunning Scirocco, Ford is seeking to reinvent one of its most famous sports cars. And it’s this dramatic evolution of the next Focus that will do it.

Boasting a stylish but practical body, it will target the Scirocco and the Renault Megane Coupe, providing a glamorous sister car to the standard five-door hatch – revealed in Issue 1,057. Appealing to young, style-conscious buyers, the new Coupé should be a big hit.

As you can see from our exclusive pictures, it takes some inspiration from the Iosis Max concept, revealed at March’s Geneva Motor Show.

That car debuted the new family ‘face’ of not only the new Focus, but the next-generation C-MAX, too. However, the three-door model evolves this with sleeker, sportier LED headlights and a deeper, more aggressive set of lower air intakes.

The key design cues, though, are the rakish windscreen, low roofline and high waistline, which meet to give a heavily chopped appearance at the back. It’s reminiscent of the Scirocco, but is arguably more daring and head-turning. A neat diffuser-style lower bumper, roof spoiler and gorgeous LED tail-lights complete the rear. Add in short overhangs and large alloy wheels, and the model looks every inch the chic compact sports car.

And because that roofline doesn’t slope down too steeply, the Coupé will be practical, too, with plenty of headroom for rear passengers and a decent sized boot. Options such as a panoramic glass roof, to further increase the feeling of light and space inside, are anticipated.

In the front, a similar cabin to the five-door is expected, with a new centre console offering an improved version of Ford’s Human Machine Interface system. The finish will have a premium feel, with options including a reversing camera.

To match its storming looks, the car will be fitted with a class-leading chassis. And this promises even more agility and grip than the five-door, without sacrificing ride comfort or refinement.

There’ll be even more reason to smile when buyers see the engine range. New turbocharged EcoBoost powerplants will be available, with most cars getting a 1.6-litre petrol, producing 148bhp or 178bhp.

A new 1.6 TDCi diesel will also debut, giving up to 128bhp, alongside a flagship 2.0-litre with 168bhp or 197bhp. All these units will combine pace with superb fuel economy and low CO2 emissions. And helping the Focus Coupé to be even more efficient will be the option of a Powershift twin-clutch gearbox. This will be offered in addition to a standard-fit manual transmission. Stop-start technology is also expected to be rolled out across the line-up.

Of course, there will be a high-performance range-topper, but it’s unlikely to be powered by the much-loved 2.5-litre five-cylinder turbo engine from the Focus ST and RS. This is deemed too thirsty, and will be replaced by a 2.0-litre, 200bhp EcoBoost four-cylinder turbo.

The new Focus range debuts alongside the C-MAX MPV at a major motor show next year.

From the legendary Capri – launched 40 years ago this week – to the brilliant Puma, Ford has scored hit after hit with its stunning coupes.

Not only have the firm’s models competed in virtually every sector of the market, but they’ve also dominated the opposition. With four-wheel-drive models such as the RS200 and the new GT supercar also joining the long list, it’s clear to see why the imminent arrival of this Focus-inspired model is creating such a stir.

There can be few more exciting prospects for UK driving fans than the first new Ford coupe for nearly 13 years.