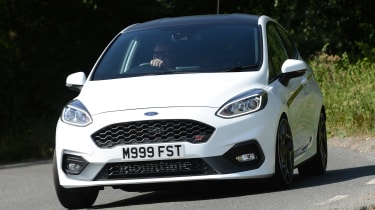 A sensible set of upgrades for the already excellent Ford Fiesta ST, Mountune’s latest range of options enhance the car’s dynamics without drastically altering its personality. They make it even more fun to drive, although the ride quality does suffer. Beware, however, that some parts may affect your existing manufacturer warranty.

The current Ford Fiesta ST is already a very convincing hot hatchback; we know this having run one on our long-term test fleet earlier in the year. We liked it so much that at the time we thought it hard to improve upon for all-round driver appeal.

But tuner Mountune has done just that with its new Fiesta ST M225, which includes a range of well-judged options that attempt to expand on the regular ST’s repertoire, rather than taking it in a different direction altogether.

The full-beans upgrade costs a fairly steep £2,866 (above the £22,895 you’ll need for a basic ST), though for this you get a decent increase in power and torque – up from 197bhp to 222bhp and from 290Nm to 340Nm. There’s a brilliant new Quickshift gearchange with a bespoke new gear knob, slightly lower and stiffer suspension, beefier brakes, a new rear spoiler, bespoke Mountune embossed floor mats plus the Mountune stripe along the doors, too. So it’s a comprehensive level of extra kit for only a touch less than £3k. 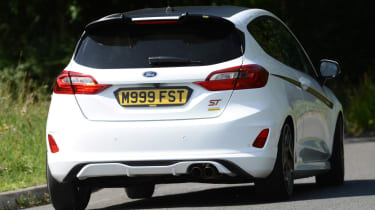 Alternatively, you can cherry pick Mountune’s options and go for individual upgrades instead. The pokier engine map costs £795 and includes a new induction system as well. The whole lot is controlled by an app, so you can play around with the map settings via your phone. That means you don’t need to carry your laptop or visit a garage to alter the map. If you want the big brakes that’s another £1,175, while the Quickshift system costs just £150 – as do the shorter, stiffer springs.

One fairly major word of warning, however; according to Mountune, none of its products are currently supported by Ford’s warranty programme, which means you risk invalidating the manufacturer guarantee by fitting any of the kit listed above. It’s a shame, as many of Mountune’s upgrades for the previous ST were covered by Ford’s three-year, 60,000-mile new car warranty.

The car we tried had everything fitted, but was still in what Mountune describes as prototype specification. The engineers are playing around with the rear spring rates at the moment, which currently make the rear end feel, in their words, “quite lively” on turn-in. They’re not wrong – and the same is true for the ride quality.

Within 50 metres you can tell just how much stiffer the M225 feels compared with the regular ST, and that’s not necessarily a welcome realisation. The way the regular car breathes with the road so fluidly, while at the same time providing such crisp chassis response, is one of its strongest qualities. Yet the M225 – to begin with – feels overly stiff, frenetically so on less-than-perfect road surfaces.

But there is an upside, and it comes in the form of heroically sharp turn in, which soon transforms into full blown lift-off oversteer if you try a bit too hard. And this is why Mountune describes the current car as a prototype. Reading between the lines, the people behind this car’s creation know it’s a bit too fruity for the buying public, and will almost certainly de-tune it in the near future by softening the rear springs a touch. 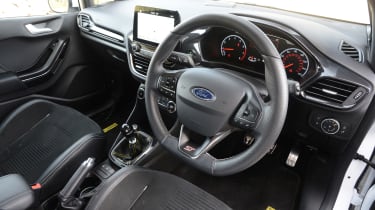 The rest of the M225 is pretty impressive, though. The 1.5-litre three-cylinder turbo engine feels and sounds a fair bit louder and stronger through the rev range. The ECU re-map hasn’t made it peaky, just more potent. The 0-60mph claim is 5.95 seconds, a tidy improvement over the standard car’s not-quite-comparable 0-62mph time of 6.5 seconds.

The Quickshift set-up also adds an element of precision to the gearchange that isn’t quite there in the regular car. The bigger brakes feel like they could stop a tank, too. The pedal feel is just so much crisper.

As for the visual upgrades, you’ll either love them or loathe them, but fortunately these are optional too; if you’re in the latter group then you just go for the dynamic upgrades on their own. At this point you’ll have a proper Q-car on your hands – one that’s even better (in most ways) than the fine car on which it’s based.