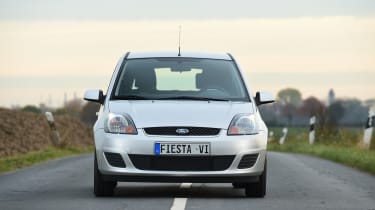 By the time the fifth-generation Fiesta made its entrance in 2002, buyers were clamouring for premium brands and upmarket design. As a result, the soft curves of the old car were ditched in favour of a more imposing, angular look that took its cues from the handsome Mk2 Mondeo.

Under the skin was a new platform that was developed in partnership with Mazda, which gave the Mk5 Fiesta a much needed boost in interior room. However, the familiar strut front suspension and torsion beam rear axle remained, as did the petrol engine line-up, meaning this model was as good to drive as ever.

The biggest mechanical change came in the form of the advanced 1.4 and 1.6-litre TDCi diesels that were produced in collaboration with French manufacturers Peugeot and Citroen. Offering excellent refinement and economy, these gutsy engines were a far cry from the 1.8-litre naturally aspirated diesel that could trace its roots back to 1983 and, up to this point, had been the only diesel choice.

The big news for fast Ford fans was the arrival of the ST, which packed a muscular 148bhp 2.0-litre engine into the Fiesta’s compact body and featured lowered and stiffened suspension for an even more entertaining driving experience.

Climb aboard our immaculate 2005 LX model and it’s clear Ford was trying to make the car more grown-up. The upright dash has a solid look and feel, while the switchgear is shared with the Focus.

On the move you immediately notice the step up in refinement over its predecessor, while the ride is even more composed. However, the engines have to work that bit harder to overcome the extra kerbweight, while the handling isn’t quite as sharp. Still, for many buyers this was a price worth paying for the increase in practicality, comfort and upmarket desirability.