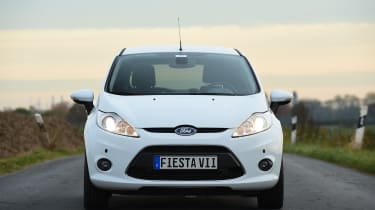 The supermini sector was more important than ever in 2008, with the global financial crisis forcing buyers to downsize and cut costs. And so in an effort to remain at the top of the small car tree, Ford pulled out all the stops with the Mk6 Fiesta.

Previewed as the striking Verve concept at the 2007 Frankfurt Motor Show, this new model clearly aimed to pull in buyers with its attention-grabbing looks. Under the flowing lines was the brand’s new Global B platform, which was lighter and stronger than its predecessor’s underpinnings.

Inside, the mobile phone-inspired centre console grouped all the infotainment controls in one place, while hi-tech options such as voice control helped keep the car at the cutting edge. It was also a little bigger than before, with five-door models rivalling the larger Focus for everyday usability.

However, climb behind the wheel and it’s the sparkling driving dynamics that really stand out. The steering is quick and precise, while strong grip and excellent body control give the car incredible agility – yet never at the expense of comfort.

The 1.25-litre engine in our test model was eager and responsive, even if it lacked outright performance. This issue was addressed with the 2013 facelift, which saw the arrival of the punchy and refined 1.0-litre three-cylinder EcoBoost turbo. There was also the 180bhp ST hot hatch, which can arguably lay claim to the title of performance car bargain of the decade.

Crucially, all Fiestas drive with the same verve and flair as the ST, and even with a new model just around the corner this supermini is still on top form.