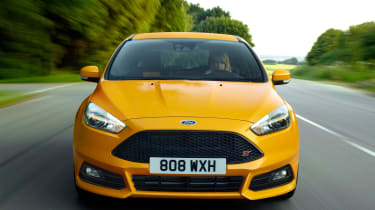 Ford's ST badge carries a lot of weight for hot hatch fans, especially here in the UK thanks to a back catalogue of high-performance hits. In recent years, the Focus ST has been overshadowed by the excellent Focus RS – but it’s still one of the best front-wheel-drive five-doors on sale.

The Ford’s steering has lots of feel, and it’s fast. Every corner is a delight; you feel connected to the road and in touch with how the car is moving around beneath you. The chassis set-up contributes to that, too, and lets you control the car’s line with the throttle. While some rivals are engaging and fun to drive, the Ford has the edge if you’re an enthusiast – but it loses out in other areas.

The trade-off for this detailed communication is a harsh ride, because big bumps crash through the suspension (not helped if you add the optional 19-inch wheels), so it doesn’t feel quite as composed on rougher roads. It’s much firmer and less forgiving than some rivals, and adaptive dampers aren’t available to dial this back.

Yet despite its extremely reactive steering and sporting credentials, the Focus ST is also a remarkably capable long distance cruiser, thanks to its quiet cabin and hugely supportive Recaro seats. If a criticism had to be made, it'd be that the low-speed ride is a tad too firm, especially on the larger 19-inch alloys. Other hot hatches are even firmer, though – the Megane Renaultsport will jiggle your fillings out – so it’s not too much of a grumble.

Ford has taken a more economical stance with the latest Focus ST, replacing the thirsty old 2.5-litre five-cylinder engine from the previous-generation car with a 2.0-litre, turbocharged, four-cylinder EcoBoost unit. This engine provides more power than the old model – a boost of 22bhp to 247bhp, coupled with 339Nm of torque – and will sprint from 0-62mph in 6.5 seconds.

However, if fuel economy is important, then the new 182bhp 2.0 TDCi option is the one to go for. Throttle response isn't as frantic as the petrol model, and that's reflected in the performance figures, but it's quick enough with loads of torque for effortless in-gear acceleration. The diesel returns 67.3mpg, but takes 1.6 seconds longer to get from 0-62mph, at 8.1 seconds, reduced to 7.7 seconds if you specify the auto transmission.

To ensure the latest car sounds as good as its predecessor, a sound ‘synthesiser’ has been fitted to both the petrol and diesel models by Ford to enhance the engine note inside. This delivers a purposeful, growling soundtrack that will no doubt please fast Ford enthusiasts. 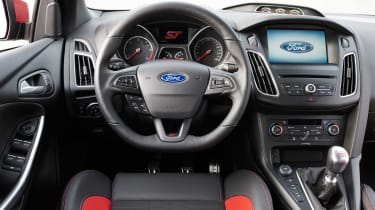 If you like the sound of the petrol model, but 247bhp is not enough, Ford's official tuner, Mountune, can bolt on a performance upgrade that boosts the car’s power to 272bhp and torque to 400Nm. In addition to taking all of 90-minutes to fit from a Mountune-approved Ford dealer, it'll also set you back around £1,200.

The Mountune upgrade is an official upgrade, so it won't void the Focus ST’s warranty. However, while the kit gives the hot hatch plenty of mid-range grunt, the additional boost in power is a little too much for the chassis to handle.