There's no denying that Ford was completely caught out when it launched the original Fusion. 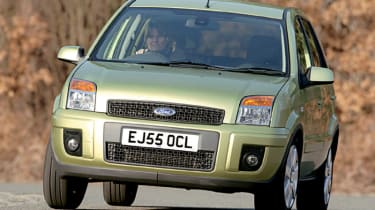 The Fusion is by no means a bad car - it drives well and has useful interior space. What's more, the update has resulted in a quality cabin with generous levels of equipment. But where the Vauxhall Meriva features a clever MPV-style interior, the Fusion offers little extra over the regular Fiesta. More versatile supermini rivals offer more.

There's no denying that Ford was completely caught out when it launched the original Fusion. Although the firm correctly identified that buyers would pay a bit more for a supermini with MPV-style versatility, the Fusion simply wasn't the car to fit the bill when it arrived in 2002.

It had a higher driving position, but offered little added flexibility over the Fiesta on which it was based. And its problems were compounded when rival Vauxhall launched its Meriva - a clever supermini-MPV with a sliding rear seat and lots of extra interior space.

Now four years into its life, the Fusion is getting a makeover. As with the revised Fiesta, it gains some minor exterior tweaks, a higher-quality interior and added equipment. But with no clever flexibility-enhancing alterations, is that going to boost sales by much?

Visually, you'd be forgiven for thinking that nothing has changed - and apart from a square mesh grille pattern and coloured indicator lenses up front, the Fusion has the same chunky Fiesta-on-stilts look as its predecessor.

On the inside, Ford has worked much harder, though. Gone are the scratchy plastics of the previous model, replaced by soft-touch materials in contrasting colours. Combine this with a revised centre console and new seat fabrics, and it's certainly a brighter place in which to spend time. The equipment list has improved, too, with most models coming with air-conditioning, an MP3-compatible stereo system and a trip computer as standard.

The top-of-the-range Fusion Plus driven here had everything, including a six-disc CD changer, rain-sensing wipers, tinted rear windows and automatic headlights. Mind you, at £14,045, so it should. Yet even for that price you don't get a Bluetooth mobile phone kit or a voice control for the audio and climate systems - together they will set buyers back an additional £250 - while a roof-mounted DVD player for passengers in the rear is a £1,000 option.

As for the mechanicals, there is noth-ing new to report. The Fusion continues with 1.4 and 1.6-litre petrol and diesel engines. Hooked up to a noisy Durashift automatic transmission that slurs gearchanges, our 99bhp 1.6-litre petrol car offered peppy but unrefined performance - and returned 36.7mpg, compared to 42.2mpg for the manual.

On the move in town, the Fusion proves to be a mixed bag - the raised ride height means that speed bumps should be easy to negotiate, but a firm ride compromises comfort. That said, it handles tidily enough.

To sum up, while the updates are welcome, they don't really address the Fusion's main problem areas - and with more flexible competitors on the market, Ford's baby is still outclassed.