The Fusion, as its name suggests, combines elements of different cars to create what Ford has dubbed an 'Urban Activity Vehicle'. 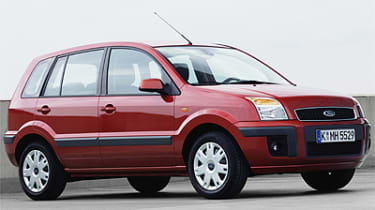 The Fusion, as its name suggests, combines elements of different cars to create what Ford has dubbed an 'Urban Activity Vehicle'. There's the practical seating, with folding and sliding functions, the capacious rear end of an estate car and the chunky stance of an off-roader. A nice concept in principal - but does it work in reality? Certainly there's a useful amount of loadspace but the seats aren't as simple to fold as supermini rival Honda's Jazz. It handles rather well, its Fiesta underpinnings making themselves felt when the roads become challenging. Its highish driving position gives a good view of the road ahead too.

However, even though it's been facelifted and given a few chunky plastic 4x4-look mouldings, it lacks one crucial element - good looks. A C-Max has a sportier profile than the slab-sided Fusion, and things aren't much better inside, though it is less plasticky than before. Equipment levels are also mean. Surely a 'UAV' should have more rugged, fashionable appeal? As for engines, the range is, rather unsurprisingly, shared with the Fiesta. Two decent petrol choices of 1.4 and 1.6-litres sit alongside two turbodiesels of the same capacities, which can eek nearly 65 miles out of a gallon of diesel. The large unit is superb but the smaller one is very pedestrian. With vehicles like the Peugeot Partner and Citroen Berlingo finding buyers there's obviously a market for a vehicle like the Fusion. With little visual flair and higher prices than such rivals, the Fusion struggles to make a convincing case for itself. Yes, it's a more practical Fiesta, but is also a car without real purpose, which low sales reflect.