Ford's US-only hybrid model maps out blue oval’s eco future - with hybrid versions of the C-MAX and Focus on the horizon. 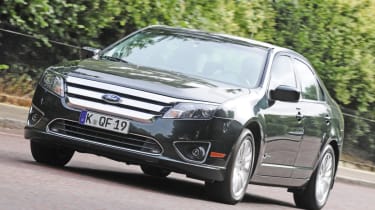 Ignore this US-spec Fusion’s body. It’s the hybrid technology underneath that matters – and it’s got lots of potential. The engine-battery combination feels very well integrated – the car switches between the two seamlessly – and electric mode extends to 47mph. Ford’s EcoGuide dashboard display is superb, too, encouraging you to get the most out of the car. It’s clear there’s still a long way to go, but by the time the technology appears in a Focus or C-MAX in three years’ time, it could be the pick of the range.

It might not look like it, but this is the future of Ford. Previously, we reported on the blue oval’s plans to bring hybrid versions of the C-MAX and Focus to showrooms in 2013.

Now we’ve got our hands on a US-specification Fusion hybrid to see how the powertrain is developing. Has Toyota’s Prius got some competition on its hands?

This American spec car features a much larger 2.5-litre petrol engine than its UK counterparts will get – they’re likely to benefit from a 1.6-litre EcoBoost turbo unit. Backed up by an electric motor, it’s quick off the mark and offers strong acceleration thanks to a combined output of 190bhp.

The Fusion switches effortlessly between its electric motor and the engine, too – so smoothly that you often have to check the dashboard display to see which is engaged.

Fuel economy of 39mpg and CO2 emissions of 170g/km are poor by Prius standards – with a smaller engine in a smaller car, expect dramatic improvements – and the noisy CVT automatic transmission robs refinement.

The Fusion will cruise in electric mode up to 47mph, though, and inside Ford’s SmartGauge EcoGuide dashboard display helps you wring the most out of the model, showing information to aid economical driving.