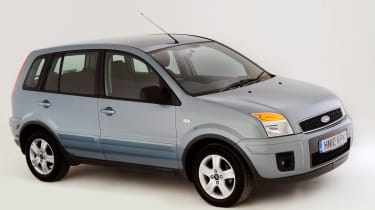 The Ford Fusion was never destined to change the world, and it certainly wasn’t going to appeal to those enthusiasts who see their cars as a style statement. For buyers wanting affordable practicality, though, it’s worth a closer look. Those Fiesta roots mean the Fusion is fine to drive, and most examples are fairly well equipped. Reliability is generally good, too, while running costs are low and there are plenty of examples on the market. Trouble is, the Ford cost too much when new, and the latest cars can still be overpriced. You should haggle hard if you want to get a good deal.

The Ford Fusion was pretty much doomed from the outset, because it wasn’t much more spacious or practical than the Fiesta on which it was based, yet was priced significantly higher. Throw in bland design inside and out, and it was no wonder critics slammed the jacked-up supermini at launch, or that buyers didn’t understand it.

However, as the Fusion combines most of the Fiesta’s good points with a higher driving position, it has much to offer – even if it’s outclassed by key rivals. Better still, thanks to a lower market profile than its stablemate, you can get a lot of car for your money.

The following October, the Fusion was facelifted, with the 1, 2 and 3 trim levels available at launch superseded by Style, Zetec and Plus specs. The update also introduced new bumpers, lights and grille, plus extra kit and a revised dashboard.

The Honda Jazz is a tough adversary as it’s very spacious and versatile, and has a fine reliability record. It’s just pricey to buy, dull to drive and only available with a petrol engine. The Nissan Note trades on reliability and style, too, with strong engines, but values stay high and the cabin is cramped.

The Renault Modus and Grand Modus are much rarer and more keenly priced. If you can afford a newer Fusion, also check out the practical, reliable and versatile Kia Soul and Skoda Roomster.