Grand Modus is a super-sized evolution of the freshly facelifted Modus. We try it on for size. 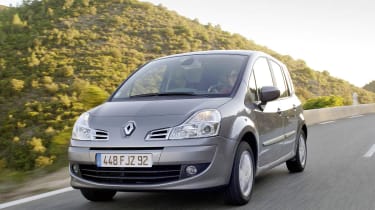 With increased boot space and a reworked bench in the rear that seats three comfortably, the Grand Modus is a marked improvement on the standard car. And as this long-wheelbase variant only adds £600 to that model’s price tag, it’s hard to imagine why anyone would pick the shorter machine. The firm’s TCE engine is a real highlight, proving economical yet surprisingly nippy around town. Couple that with Renault’s safety record, and it’s clear this car is a practical family choice.

Take a look at Renault’s latest grand design! The Modus has grown up with a version that promises to right the wrongs of its smaller sibling.

Called the Grand Modus, it’s a super-sized evolution of the freshly facelifted Modus. It takes its inspiration from the Grand versions of the Espace and Scenic, so offers a bigger boot and more practical seating set-up than the standard car.

The changes haven’t ruined the supermini-MPV’s styling. It has similar bodywork to the original model, but the new headlamps bring it up to date. From the family nose, along the sweeping roofline to the rear door, the mini people carrier is every inch a standard-bearer for the French company’s design philosophy – but how does it measure up inside?

By adding 93mm to the wheelbase and 160mm to the length, Renault has given the Grand extra space in the rear, plus a couple of advantages over its smaller stablemate.

The additional room means that there is now up to 117 litres more boot space, with a maximum capacity of 1,454 litres when the sliding rear bench is folded flat. The set-up also means the car can now comfortably fit three in the rear, although short­ened runners mean maximum legroom has been reduced slightly.

Inside, the cabin is basic but well built. The central instrument binnacle has a simple design that’s easy to read, and there are plenty of clever storage spaces, including a handbag-sized cubbyhole located under the front passenger seat squab.

The elevated driving position pro-vides a clear view of the road ahead, and the car’s high roofline also ensures that visibility is good. A panoramic sunroof helps keep the cabin feeling light and airy, too.

Light but responsive steering and a slick five-speed gearbox mated to the all-new 1.2-litre TCE (Turbo Control Efficiency) petrol engine mean the Grand Modus is perfect for nipping around town. But it can run out of steam a little when cruising along the motorway, where inclines and overtaking manoeuvres are best tackled by shifting down a gear.

The ride is smooth and comfortable, and while the car is unsettled by really big bumps, for the most part it is easy to drive and uncomplicated.

The new TCE unit replaces the firm’s old 1.4-litre petrol engine. Yet while it offers decent pace and economy, in our experience, the real-life mpg achieved by larger diesels – such as the 1.5-litre dCi 86 or 106 offered in the Modus – typically comes closer to industry figures than turbo petrol engines.

Overall, the Grand Modus is a capable contender – and with its larger boot and spacious rear seats, it’s more desirable than the standard car.

Even so, the competition in this sector of the market means Renault can’t take anything for granted, even with a model as grand as this.

Rival: Nissan Note A spacious and versatile interior, plus Nissan’s impeccable build quality, still make our current champ a favourite. But you’ll have to pay slightly more for the privilege.