Practicality, versatility and value for money - three virtues that have made the Renault Modus a first choice for more than 8,000 drivers since its launch last September. Now the French firm wants to widen the appeal of its supermini-MPV to attract people who want luxury, too. 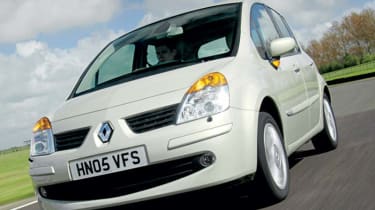 There's no doubt that the Modus is a great supermini-MPV, but for most the Initiale model will be too pricey. There are plenty of extras and the slick six-speed box and punchy diesel are a winning combination, but most buyers should go for a cheaper variant, as we reckon this Renault makes more sense as a base trim budget bargain.

Practicality, versatility and value for money - three virtues that have made the Renault Modus a first choice for more than 8,000 drivers since its launch last September. Now the French firm wants to widen the appeal of its supermini-MPV to attract people who want luxury, too.

Adding a new flagship diesel engine and a plush trim level widens the Modus line-up, but will it boost the Renault's growing list of owners?

Badged Initiale, the range-topper is set apart from lesser models by its unique 16-inch alloy wheels and met-allic paint. The extras give it a smart look, but the mature finish can look at odds with the rest of the funky design when sombre colours are used.

To coincide with the launch of the top-spec trim, the range also gets a new diesel engine developed as part of the Renault-Nissan alliance. The flagship 105bhp 1.5-litre dCi oil-burning powerplant replaces the 79bhp unit, offers more power and complies with strict Euro IV emissions regulations, too. Buyers also benefit from a new six-speed manual gearbox which is both smooth and slick-shifting.

Out on the road, the engine and transmission combination gives strong performance and decent refinement. With 240Nm of torque at 2,000rpm, there is plenty of in-gear thrust, but the power is delivered in a fairly narrow band that requires plenty of changes. Thankfully, the system is light and accurate, and the tall sixth ratio is a bonus on long motorway hauls.

A 0-62mph sprint time of 11.2 seconds and top speed of 116mph might not sound too impressive, but this diesel Modus is far quicker than the figures suggest when it comes to everyday motoring. What's more, owners of the existing 79bhp version, which takes 13.4 seconds to get to 60mph from standstill, will notice a big step up in pace. However, while performance and refinement are good, the economy is staggering. In the combined cycle, the new unit returns 60.1mpg - a drop of just under 1mpg against its less powerful and more polluting predecessor.

The cheapest Initiale is the £13,550 1.4-litre petrol-engined variant, but buyers who want the fantastic mix of performance and economy of the latest diesel have to fork out £15,150.

That's a lot for a Modus, but there is plenty of kit on offer. Its spec includes leather trim, climate control, xenon headlamps and the useful 'boot chute' tailgate hatch optional on most other models. If you want the best-equipped small car on the market, look no further.