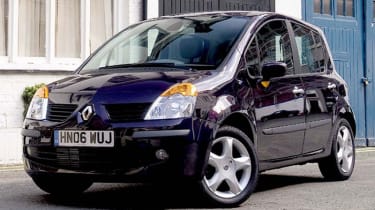 Mixing top-notch exterior design with average interior versatility, the Modus is so very nearly a brilliant car. Excellent safety kit and a varied range of models make it a machine that should be far more popular than it is. However, while it’s generously equipped and boasts admirable fuel economy, the unusual sequential gearbox and hefty price tag take some getting used to.

Few companies match success with failure like Renault. And you don’t have to look too hard to discover that for every one of the French firm’s smash hits, such as the new Clio, there’s a dramatic miss – does anyone remember the Safrane luxury car?

So where does the Modus supermini-MPV slot in? If it’s a miss, then it’s not because the engineers at the company aren’t trying hard enough. Even though the range is already varied, Renault has come up with an all-new low-emission, high-spec model – and Auto Express is the first behind the wheel.

The Quickshift promises to add more desirability to the Modus line-up. It combines a Formula One-style sequential gearbox with an 86bhp 1.5-litre dCi diesel powerplant to provide fuel returns in excess of 60mpg, plus annual road tax costs of only £50.

With neat styling, a spacious interior and impressive build quality, this latest supermini-MPV would seem to have everything going for it. From behind the wheel, visibility is good and the cabin is light and airy, thanks to an impressively large glass area. The switchgear of the top-spec Initiale version we tried is extremely well laid out, and there are enough gadgets and gizmos to keep even the most demanding driver and passenger occupied for hours. With air-conditioning, heated seats and electric windows as standard, the little Modus has the kind of equipment many larger rivals struggle to match.

The front chairs are comfortable and supportive, and while passengers in the rear will find leg space is in short supply, headroom is extremely good. Out on the road, the ride is comfortable and the steering direct. The electrically operated system is a little low on feedback, but at least it proves accurate.

However, what sets the Modus Quickshift apart is its new sequential transmission. The conventional-looking lever, which has both manual and fully automatic modes, promises to offer quick and smooth changes.

And in the main, it delivers. On the open road, full-throttle gearshifts are very neat, and the Renault alternates between its six ratios with the minimum of fuss. Around town, the system takes a little more getting used to. Both the throttle and brakes need to be applied carefully to make smooth progress.

Not that we have any complaints about the way the Modus slows down. With disc brakes all-round, the Renault pulls up sharply, while stability control helps keep things in a straight line in slippery conditions. When it comes to safety, this top-spec Initiale is almost without peer, with a five-star rating in Euro NCAP independent crash tests.

Unfortunately, it’s not all good news. Compare it to its class opponents, and the Renault’s challenge is blunted. Even if you ignore the Ford Focus-sized price tag, at £15,100, there’s no avoiding the fact that the Modus feels cramped with four people on board.

Boot space is limited, and the cabin is not as versatile as that of competitors such as the Honda Jazz. So for every hit the Modus Quickshift makes, there’s an equal miss – and in the case of its lack of practicality, it’s something that could turn customers away.