The Modus' leather interior is needing more upkeep than expected 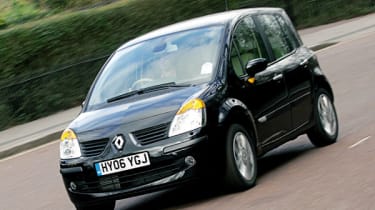 I am not a huge fan of the vast expanse of grey all too often found in today’s car interiors, but I must admit I am beginning to see the appeal of such a workaday colour scheme.

I’ve been driving our long-term Modus for four months, and the practical limitations of the otherwise attractive beige leather trim that is the hallmark of this top-of-the-range Initiale have made themselves depressingly apparent.

The plastic finish on the steering wheel, dash and doors was already starting to look grubby when I took delivery of HY06 YGJ, and the weight of miles has really taken its toll. And that’s with the car spending most of its time commuting, occupied by only myself and the occasional passenger; goodness knows how it would have stood up to the ravages of family use for which Renault intended this ultra-versatile model.

Yet even if I have recently spent inordinate hours scrubbing the trim, the practical, carefully thought out cabin otherwise impresses. The Stay Put cubby, revealed by lifting the passenger seat squab, stops the clutter in my bag spilling on the floor, while the additional mirror certainly helps with rearward vision. There are plenty of storage options, and the boot is surprisingly spacious.

Running this Renault is a somewhat hands-off experience – as indicated by the stubby bonnet opening to reveal only enough of the 86bhp 1.5-litre diesel engine for an occasional fluid check.

The first service isn’t due until 12,000 miles, but the car paid a premature visit to my local dealer, Renault Watford, when the dash ABS and ESP warning lights illuminated. The culprit was a faulty brake pedal switch, and a part had to be ordered in. The work was covered under warranty, though, and the experience was painless. Friendly and efficient garage staff provided a pristine courtesy Clio for the two days they had the Modus.

Despite its five well spaced gears, I am still not keen on using the little Renault on major motorway hauls, preferring instead to swap it for one of the larger, longer-legged vehicles on our fleet. But I can’t argue with the Modus’s economy – the car regularly returns up to 46mpg now the motor has settled in. I am also reassured by the fact that this was the first-ever supermini to achieve a five-star rating in Euro NCAP crash tests.

The real challenge now is to keep the Pearl Black exterior as sparkling as my recent cleaning frenzy has left the cabin – not an easy task, due to the south east’s current hosepipe ban!

I know the styling isn't to all tastes, with some colleagues claiming it looks a bit mumsy, but the Modus's tall roof and slightly raised driving position provide a superb view of the road. And the 86bhp turbodiesel is great in town - it's not only economical, but also nippy, responsive and smooth. Nor do I have an issue with the car on motorways. As with the new Clio, the Modus handles high speeds better than many rivals.Lesley Harris, road tester