Renault's Modus is cheap to run, nippy in traffic and will be missed when it's returned 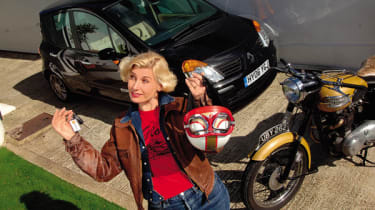 Thanks to its economical 1.5-litre diesel engine and low-rate Band B road tax ranking, Renault's Modus is pretty cheap to run day-to-day. However, that doesn't mean it's exempt from London's Congestion Charge - and being based in Auto Express's HQ in the West End of the capital, that means a steep £8 payout every day.

So, as the charge is intended to make city drivers think about using other, less environmentally challenging modes of transport, several members of staff have come up with alternatives. Some live close enough to cycle, others have hopped on cheap public transport, a few from further afield have been car sharing, while the popularity of the sole charge-free model on our fleet, Lexus' GS450h hybrid has soared.

The only other sensible option left to some - including me - is to use a scooter or motorcycle, weather permitting. With its ancient mechanicals, temperamental character and absence of indicators and mirrors - completely legal on a bike of this age - my 1958 Triumph Thunderbird is probably not the most obvious choice. However, it's nimble enough to do battle with fearsome city traffic and, more importantly, is Congestion Charge-free.

Yet this doesn't mean the Modus has been able to sit back and put its feet up. I have still been putting plenty of miles on the French five-door regardless - and the nippy little supermini has done me proud. Its hard work has recently been rewarded with a 12,000-mile service and pamper, carried out by Renault Watford. Although it cost £216.16, the work was done promptly, the staff were courteous throughout, and the check-up should ensure that HY06 YGJ is kept in fine fettle for the rest of its tenure with us.

The Modus is due to be returned fairly soon, but I'm positive we'll be spending plenty more time together until then. Numb fingers and 50-year-old braking technology are not that conducive to safe motorcycling in icy conditions, so I reckon I will quite willingly be seduced by the lure of a heated cabin, drivetime radio and four wheels.

Second opinion Comparing the little Modus with our Vauxhall Zafira, I was always going to notice the difference in space - but Imanaged to fit in a large family shop, and there was adequate room in the back for my teenage daughter's friend and her mum. The Renault is perfect for a day out in town, too; nippy in traffic, it also manages to fit into the smallest parking spaces.Dawn Tennant, picture editor