The Ford Fusion is essentially a previous-generation Fiesta with a raised ride height. It's spacious but outclassed by rivals 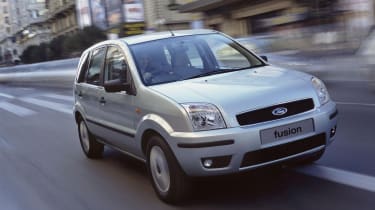 The Ford Fusion was supposed to be a rival the the best supermini MPVs, like the Honda Jazz and the Nissan Note. And while it sold in profitable numbers for Ford (largely thanks to the company’s large dealer network) it failed to challenge the class leaders in any regard whatsoever.

Based on the previous generation of the Fiesta, it did at least offer a certain amount of practicality with a decent amount of space inside, although for an MPV it wasn’t particularly multi-purpose. After a decade-long run, production of the Fusion came to a halt in 2012.

There are two petrols and two diesels in the Ford Fusion range. Both 1.4 and 1.6 petrols are smooth and quiet in town, although they sound harsh on the motorway. The 1.4 is the better bet, as it still has enough pep for most drivers and is more economical. The 1.4 TDCi isn't a hot hatch, but it's better than the pricier 1.6 TDCi. The Fusion is based on the old Fiesta, so is generally precise and good to drive, but the raised body means there is more roll in corners, and the car's ride is very firm.

You can expect the Ford Fusion to have similar running costs to a Fiesta, which means a Honda Jazz or Nissan Note will be cheaper to run. Diesel versions are capable of returning around 60mpg, but they do cost more than their petrol brothers, so make sure you are doing enough miles to compensate. Residual values are on the low side. If you want to buy a supermini-MPV that holds onto its money, the Honda Jazz is the pick in this class. As for equipment, even basic Style+ models have reasonable equipment, including electric windows and mirrors, a heated windscreen, CD/stereo and air-con.

The Ford Fusion is a raised version of the previous-generation Fiesta, with an extended roofline and semi-estate car-style tail. It wasn't good looking even compared to rivals from 10 years ago, and is outdated today - certainly when compared to the current Fiesta. Mid-spec Zetec versions look the best with sporty body-coloured bumpers, alloy wheels and foglights, but the Honda Jazz and Nissan Note are both much more stylish designs. The cabin is best described as durable, with hard-wearing plastics and strong functionality. It's not modern or stylish like the latest Fiesta, and doesn't have the quality feel of a Jazz.

This is where the Ford Fusion really disappoints. It should be more flexible and spacious than the average supermini, but while there's a bit more luggage room and headroom than the Fiesta, there's no sliding bench like in the Nissan Note – all the rear seats do is split and fold. However, a low lip means it is easy to load shopping bags into the boot, although there aren't many cubbyholes up front for hiding phones and coins. The driving position is slightly raised over a Fiesta, which makes getting in and out easier and allows a better view. However, the steering doesn't have reach adjustment, so it's not as comfortable as more modern cars.

The Fusion is a safe car, despite its age. It scored a four star rating in the Euro NCAP crash tests, while all Fusion variants have front airbags – you'll have to pay extra for side and curtain airbags, as well as stability control. Reliability is not likely to be a strong point – the Fiesta on which it is based has not performed well in the Auto Express Driver Power surveys. 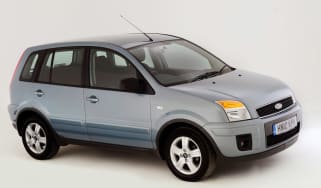 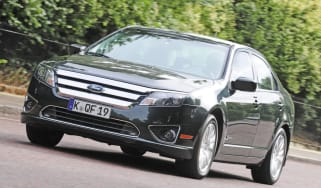 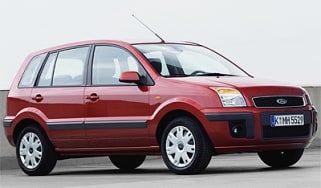 The Fusion, as its name suggests, combines elements of different cars to create what Ford has dubbed an 'Urban Activity Vehicle'.
Ford Fusion 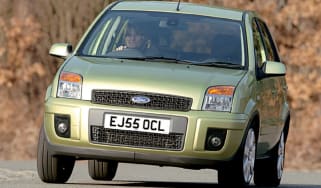 There's no denying that Ford was completely caught out when it launched the original Fusion.
Ford Fusion Plus 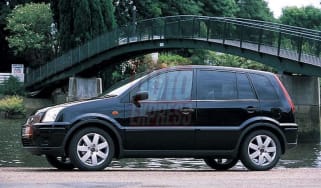 The reaction to Ford's Fusion has been a little cool, to say the least. Compared to the funky concept seen at the Frankfurt Motor Show in 2001, the pr…
Skip to HeaderSkip to Content