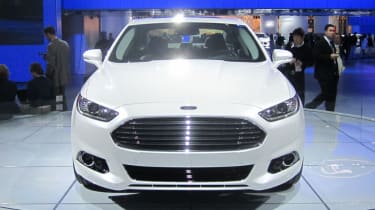 20
The fight for the future of the family car starts here. Ford boss Alan Mulally has pulled the wraps from the stunning new Ford Mondeo, which will go on sale in the UK in March 2013.
Mulally described the launch of the newcomer as a key moment in Ford's strategy for 2012 - a year in which the US firm will launch more cars that ever before.
Video: watch our video of the new Mondeo at Detroit
[[{"type":"media","view_mode":"content_narrow","fid":"69633","attributes":{"alt":"","class":"media-image"}}]]
Promising that 10 new models will be based on the chassis that underpins the new Mondeo he outlined an ambitious plan that sees the car maker selling 1 million versions of the new Mondeo every year by 2014.
Like the Fiesta, Focus and Kuga, the newcomer is a world car that will be sold unchanged across the globe. It will be called Fusion in the US, but will continue to be known as Mondeo in the UK and Europe.
Pricing is likely to match the current car, particularly when it comes to the popular Edge and sporty Zetec models – which start at £17,795. But in other respects, it’s all change.
From the body to the chassis to the engines, everything about this fifth evolution of the Mondeo is brand new. And for the first time ever, there will be hybrid and plug-in hybrid models that’ll return 56mpg and 140mpg respectively.
The new car is seen here in saloon form, but hatch and estate versions will be built, too. And it’s rumoured that Ford is also planning a dramatic four-door coupe rival to the VW CC, inspired by the Evos concept seen at last September’s Frankfurt Motor Show.
Cutting-edge entertainment technology and new safety kit are promised as well, including a lane-keeping system, radar-equipped adaptive cruise control and hands-free auto parking.
Inside, the new Mondeo will also get SYNC, Ford’s Microsoft-developed in-car entertainment system, which streams music to the car’s speakers from your phone and also incorporates Bluetooth and Internet access. The MyFord Touch system will be available, too, offering voice control for all major systems.
If this sounds like a radical overhaul, it is. But the new Mondeo doesn’t only have to prove it can compete with rivals globally; it has to reinvigorate the declining family car class, too.
The designers’ most obvious achievement has been shaking off the boxy silhouette of older Mondeos. The new car measures 4,869mm long, 1,852mm wide and 1,476mm tall – about the same size as the current car – but it’s four centimetres lower, meaning it has a much sleeker profile. There are slimmer roof pillars and the bodywork has a smooth, unruffled finish. The 19-inch wheels give the show car plenty of presence, and will be available as an option on the popular Zetec trim level.
The new grille and headlamp arrangement takes inspiration from the Evos concept and signals a new evolution for Ford’s Kinetic design language. Sparkling LED tail-lamps and polished exhausts add a touch of class to the car.
The driver-focused cabin offers upmarket fit and finish, with soft-touch plastics and fabrics on the dash and doors. Seats are supportive, and there’s an oversized centre console, which helps separate the driver from the rest of the cabin. Elsewhere, extra space has been freed up by moving the dash closer to the windscreen and redesigning the seats to make the most of the car’s 2,850mm wheelbase.
We've sat in the new cabin, and can report that the quality does represent an improvement over current Fusion. It's a near match for current Mondeo too, featuring a clean, neat design that puts the driver centre stage.
But as impressive as the design is, it’s what’s under the skin that should give the new Mondeo an edge over rivals when it goes on sale here next year.
For starters, there will be one of the broadest selections of fuel-efficient engines ever seen in the family car class. The stars of the show will no doubt be the petrol-electric hybrids, but the line-up will also feature 1.6 and 2.0-litre turbo EcoBoost petrol engines, equipped with stop-start technology. Diesel choices will include updated versions of the 1.6 and 2.0-litre TDCi engines already seen in the Focus. All cars will also offer a choice of six-speed manual or paddleshift SelectShift automatic gearboxes.
And the news doesn’t end there. According to one source, Ford is testing an ultra-efficient version of the new Mondeo, powered by a 1.0-litre EcoBoost engine. This could appear in 2013.
All of that is backed up by the latest entertainment and driver-assistance technology that will use new sensors, cameras and radar which enables the car to see the road ahead and respond to danger.
How will the Mondeo drive? We haven’t tested it yet, but the ingredients look very promising. The car’s bodywork is 10 per cent stiffer, which should improve steering accuracy and offer a more stable platform for mounting the suspension.
It also gets tuned electric power-steering, plus MacPherson strut front suspension and an all-new multilink set-up at the rear – comparable to systems seen in current Audis and BMWs.
Refinement promises to be first-rate, too. All versions of the Mondeo get acoustic underbody shields and weight-saving sound-absorbing material. The model will also be one of the first cars in the family class to feature a full-perimeter bonnet seal.
What’s more, hybrid and plug-in hybrid versions of the Mondeo will have active noise control, which uses the audio system to cancel out road noise and enhance the engine note.
Unsurprisingly, the new car gets the very latest safety technology. As well as offering a stronger body, it will have dual front knee airbags, plus adaptive front airbags that deploy according to the seat occupant’s size, position and seatbelt usage.
The countdown to the launch is now well and truly underway, and the Mondeo’s next public outing will be at March’s Geneva Motor Show, where it’ll appear as a hatchback. From what we have seen, it looks like Mondeo Man has never had it so good.

Leading the way for safety kit

Like the latest Focus, the new Mondeo will be packed with Volvo levels of technology. It gets a lane-keeping system that uses a forward-facing camera behind the rear-view mirror, alerting the driver if the car drifts out of its lane. If no action is taken, the car will steer itself back in line.

Meanwhile, the adaptive cruise control uses radar that looks down the road, keeping pace with traffic ahead. When not cruising, the system can also brake the car if it detects a crash is imminent.

It will even work when you’re backing out of a parking space with an obstructed view.