Plans for hatchback and estate versions of Ford Mondeo, and firm promises the new car will be better than ever to drive 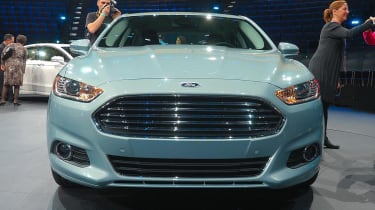 Ford has confirmed plans to build hatchback and estate versions of its new Mondeo, both of which will go on sale in the UK in early 2013.

Although no official images are available, Auto Express has seen early images of both cars.

Video: watch our video the new Mondeo at Detroit

What's most striking is the fact that the hatchback gets an even more rakish roof line than the new saloon, which was revealed at this week's Detroit Motor Show.

There are also new doors at the rear, to accomodate the car's larger luggage area. In profile, the practical machine looks closer in spirit to the Audi A7, while at the front, it keeps the slender headlamps and imposing grille seen on the saloon.

The estate promises class-leading luggage space and gets a vast new boot that Ford says will focus on "usable space".

Even so, in the images seen by Auto Express the car still gets a slighly arcing roof line. It will also ride lower to the ground than the current model.

Ford is describing the car as having the character of an "elegant grand tourer".

Backing that up will be a driving experience that Ford says will offer unrivalled precision and impressive refinement.

All cars get a new multilink rear suspension set-up, designed to improve stability and ride comfort. The car will also feature the same Torque Vectoring control system seen on the new Focus ST, which will brake the wheel closest to the inside of a corner to improve cornering stability.

On the open road, wind noise should be kept to a minimum with new accoustic bodyshields, plus improved aerodynamics, which also deliver a 10 per cent improvement in the car's drag coefficient.

But plans for a new hatchback and estate are just the first step in an ambitious plan to launch 10 new cars using the same platform as the new Mondeo saloon.

Also under development, according to one insider, are new versions of the S-MAX and Galaxy, as well as replacement for the Flex, which is a big seller in the US.

The firm will also use the chassis to underpin a new saloon from US luxury brand Lincoln. Call the MKX, this car was revealed as a concept at the Detroit Motor Show, and will go on sale in late 2012.