The Ford Shelby Mustang GT500 muscle car will be the most powerful production model Ford has ever built, but sadly it's not coming to the UK 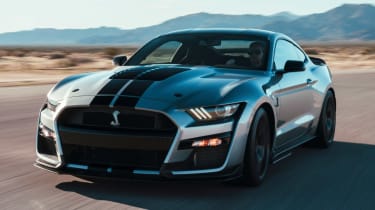 The new Ford Mustang Shelby GT500 will arrive on the American market in 2020 with a host of chassis and aerodynamic upgrades, as well as a new engine that will be the most powerful Ford has ever built.

The GT500’s unit is a hand-built all-aluminium, supercharged 5.2-litre V8 fitted with forged con-rods, a new structural engine sump and a water-to-air intercooler system. It produces 760bhp and 847Nm of torque, which Ford claims makes it the world’s most power-dense supercharged production V8 engine.

It feeds its power to a seven-speed dual-clutch gearbox, through a carbon fibre propshaft to the rear wheels. The transmission is capable of shifting gear in under 100 milliseconds and has a series of drive modes tailored towards road, track and drag strip driving. 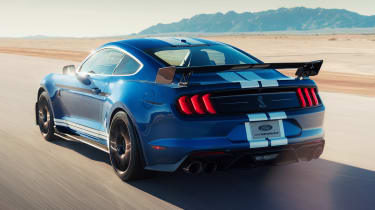 Ford is yet to disclose full performance specifications for the Mustang GT500, which is set to rival the Dodge Challenger Hellcat and Chevrolet Camaro ZL1, but the American brand has revealed its latest flagship muscle car will have a 0–62mph time of around three seconds and will cover the quarter-mile in under 11 seconds.

Pricing information for the latest Mustang GT500 is yet to be announced, but Ford has announced that the new model will not be sold in the UK.

Now read our review of the standard Ford Mustang. Let us know your thoughts in the comments section below… 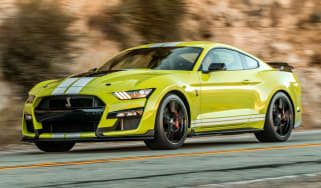