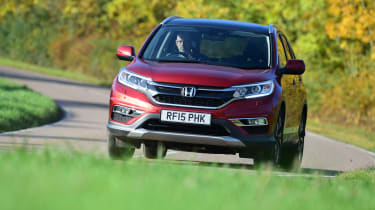 Honda has registered a patent in Japan for a new type of triple-clutch gearbox, with 11 speeds. It's a new automatic transmission that is aimed at improving efficiency even over modern dual-clutch gearboxes.

The patent description, spotted by AutoGuide, notes that the gearbox will allow “speed change to be more effectively restricted and a speed change response to be increased.” According to the source, it also reduces torque losses compared to a normal dual-clutch gearbox.

What this means in practice is that the transmission will shift faster and more smoothly, reducing the jerkiness sometimes found when a traditional gearbox changes gear. With 11 ratios, the 'box will also be able to find an ideal gear for the drivng situation more easily. This will help with fuel economy and emissions - so it's expected to appear in an efficiency context rather than a performance one.

The Honda patent was published on 27 May this year, but don't expect to see it on a production car any time soon, if at all. There's no guarantee that Honda is going to use the technology but we now know it's in the thinking of the firm's engineers.

11 gears does sound like a lot but the gearbox arms race has been escalating for a while. The current Honda CR-V comes with a nine-speed automatic gearbox, and brands like Mercedes are pushing ahead with the tech as well. Both GM and Ford have 10-speed automatics ready to be fitted to models in the US and Ford is said to have filed a patent for an 11-speed unit but we've not seen one on the road yet. It's surely only a matter of time.

What do you think of the idea of an 11-speed, triple clutch gearbox? Let us know below...