"I'm moving house at the weekend, is there any chance I can borrow the Accord Tourer?" It's a phrase that's been heard often in the offices of Auto Express over the last 13 months. At least four members of the editorial team have swapped to a new home, and if there was one car on our long-term fleet that was more than up to the job, it was the big Honda. 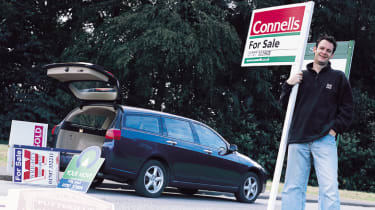 "I'm moving house at the weekend, is there any chance I can borrow the Accord Tourer?" It's a phrase that's been heard often in the offices of Auto Express over the last 13 months. At least four members of the editorial team have swapped to a new home, and if there was one car on our long-term fleet that was more than up to the job, it was the big Honda.

The For Sale signs in our main picture have a double meaning, because the lovable load-lugger has served its time as our 2.4-litre work-horse, and will soon be looking for a new owner itself. After 27,300 miles - and goodness knows how many tonnes of cargo - it's time for the Honda Accord Tourer to depart.

The reason estate cars exist is for their practicality and versatility - so how has this one done? Overall, it's scored very highly. The boot is big with the rear seats in place, but when they're folded flat, it's a massive 1,707 litres and easily capable of swallowing lots of little boxes or one big item of furniture. There's also a handy storage bin under the boot floor, which I've used several times to stop smaller items rolling around.

The clever one-handed mechanism for collapsing the seats is an excellent idea, using hidden gas struts to tuck the base away as the back is moved forward. However, it's not perfect; the weight of the larger side of the 60:40 splitting bench is heavy, and I doubt everyone will be able to move it with only one hand.

The other major problem with the cabin is its colour. The beige leather and cloth - or Ivory as Honda officially calls it - isn't the most sensible choice, and even though we've taken great care not to dirty it, it's been a nightmare to keep clean.

A professional valet before the car goes back to Honda will spruce up the interior, but it's still going to look past its best. One final niggle on the cabin relates to the storage bin between the front seats. For some reason it's come loose and wobbles from side to side. I suspect a screwdriver will quickly solve the problem. And that's about all there is to criticise on RE03 AET. The petrol engine and six-speed gearbox make the car an excellent motorway cruiser, but it's equally happy when it's just motoring around town.

The driving position is comfortable, and the electrically powered seats mean it's popular with people of all sizes. The sat-nav has won praise, too, particularly from those heading for new homes along unfamiliar routes. It's clear and accurate, and we rate it as one of the best around.

Another gadget that comes as standard is the remote boot function. You can open the hatch from the keyfob and close it by pushing a button on the tailgate. When I first saw it I branded it a gimmick, but I've eaten humble pie since. With arms full of a young child, boxes or garden waste, it's proved its worth. At 25,000 miles we booked the Accord in for a major service at Alan Day Honda, Finchley, north London. Staff were efficient and the car was ready when they said it would be.

The most interesting item on the bill was the Check-it Kit (engine oil, screenwash and wipes), which cost me £8. I queried it and was told it had been put in the boot. Apparently it's something all Honda garages are providing, as surveys have shown it's what customers want. I was told that if I didn't want one it could be taken off the bill. I kept it - it will be handy for the new owner.