On an epic road trip across the EU, a Honda Civic Tourer breaks the Guinness World Record for fuel economy 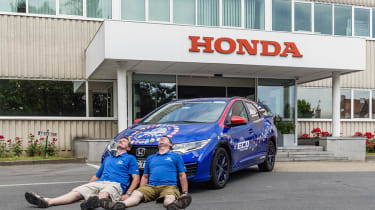 Fuel consumption is a big deal these days, with the most efficient cars keenly sought-after by buyers but without driving like an aerodynamically optimsed saint, it's pretty hard to recreate a vehicle's official fuel economy figures. Or is it? Honda set out to prove that mpg above and beyond the official numbers is possible in its Civic Tourer setting a 100mpg world record in the process. 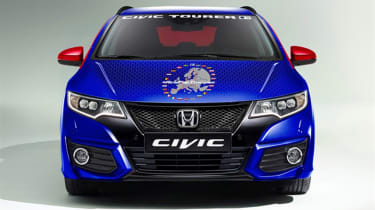 While this would be easy to achieve in some specially lightened economy champ, rules stated that the car had to be an unmodified, road-going model, using regular fuel and brimming the tank at each fill-up ensuring no weight advantage. The car was driven by the same two colleagues from Honda's R&D department and between them they drove an average of 7.5 hours a day. They began in Aalst, Belgium, and after visiting  all 24 EU countries returned to their start point.

It's certainly a compelling advert for what's possible simply with careful driving - the Civic Tourer averaged 932 miles on each tank of fuel, and only cost £459 in diesel for the entire 8,837-mile journey. That's a similar distance to driving from the UK to Australia. After the 25-day journey, the drivers are said to be looking forward to being back behind a desk rather than a wheel.

How does your car perform for economy? Why not tell us your top tips for maximum mpg in the comments below...